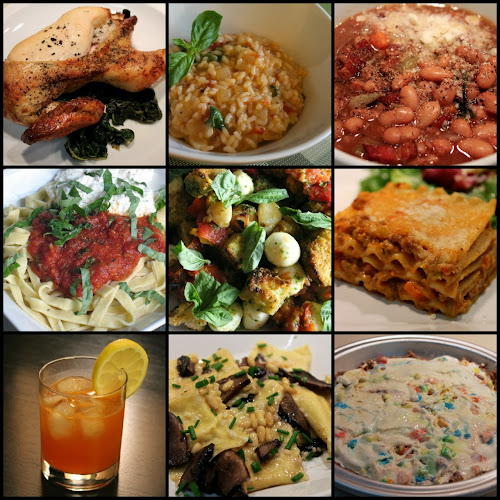 Most of the recipes I write about on Cook In / Dine Out can be made in less than an hour. While I'm not aiming to write a convenience cooking site, it's just a practical matter: I work full-time and I don't have time to make elaborate meals during the week. When you do see longer recipes on my site, they're probably ones I made on a weekend.

With the federal government having shut down, many home cooks may find themselves with extra time to explore midweek cooking that's more involved than usual. Seize the opportunity to make something special for your family, your sweetie or just yourself. Besides filling time, a tasty cooking project can nourish your body and your soul. Plus, it provides the satisfaction of accomplishing something.

Below are some of the more time-intensive recipes I've featured, sorted by category. I've also discussed ways to cut costs on some of the recipes, since, non-pay status makes splurging on luxury food items feel like, well, a luxury. By their nature though, a lot of recipes that take a long time to cook don't use expensive ingredients. It's the time and care that bring out their good flavors.

The complex flavor of bolognese sauce comes from slowly cooking it over the course of the afternoon. This Bolognese-Style Lasagna takes the better part of the day to make, given the time for the sauce, assembling the dish and baking it. The recipe is from Italian-food cook Marcella Hazan, who died this week. Cost savings: nothing in this recipe is particularly expensive except possibly the tomatoes if you buy an imported brand.

Spice-Brined Roast Chicken will easily fill up several days, since it requires an overnight brine, drying time and the actual roasting. Cost savings: there's no getting around the cost of the chicken, although if you substitute whatever spices you have on hand for the brine, that's really the only cost in this dish.

Slow-cooking meats is the sort of day-long process I usually only have time for on the weekend. Slow cooking is a great way to treat pork shoulder which, in the Carnitas Tacos, gets an additional broil in the oven to crisp it up a bit. Although the pork has many hours of inactive cooking, this recipe will fill that time as you prepare the homemade corn tortillas and corn salsa, refried black beans and guacamole garnishes. Cost savings: the pork shoulder is the only major cost of this dish; the masa harina, while seemingly exotic to some, is less expensive (and way tastier) than store-bought corn tortillas. If you don't have a tortillas press, roll the balls of dough out between two sheets of plastic wrap or parchment to about 1/8-inch thickness.

The very word "stew" implies something that is cooked slowly over a period of many hours. I've made two really incredible stews this year that are well worth their time. Jacques Pepin's Beef Stew in Red Wine Sauce is about the best Beef Bourguignon I've ever had. The meat is first browned on the stove and then roasted in the oven with the wine for a long time. The vegetables are cooked separately and then combined in the end. Cost savings: use less-expensive beef chuck in place of flatiron steak; any red wine will work, although make sure it's one you would also drink (don't substitute a so-called "cooking wine").

Smoky Red Wine, Pinto Bean and Bacon Soup, an absolutely wonderful recipe by New York Times writer Melissa Clark, still takes hours to prepare, despite the time I shaved off by cooking the beans with a faster method. If you love beans and bacon, this is the best way I've ever had them together. Cost savings: using dried beans is more economical than canned; use any red wine you have on hand, but don't substitute a bad wine or that will be reflected in your dish.

It's so easy to open a box of dried pasta and boil it. It's another thing to make your own. Fresh pasta has a flavor and texture that dried pasta just cannot beat. For something simple, try Fresh Pasta with Homemade Ricotta and Roasted Tomato Sauce (homemade ricotta is another good cooking project). For something more involved, try Toasted Fazzoletti with Mushrooms and Hazelnuts or, if you're really up to a challenge, Sweet Corn Agnolotti with Mushrooms, from a recipe by Mike Isabella of Graffiato and Top Chef. Cost savings: Although pasta (semolina) flour is often recommended, you can make pasta with standard all-purpose flour. Substitute sauce ingredients as needed.

Gnocchi dishes come together in a snap if you use store-bought gnocchi. Making your own takes time, but I think you'll find it's worth it. You can get much lighter, tastier dumplings if you make them yourself. Although potato is traditional, such as in Gnocchi with Sausage-Mushroom Ragu, using other root vegetables like sweet potatoes (Sweet Potato Gnocchi with Sage) or beets (Beet Gnocchi with Walnut-Sage Butter) are more flavorful. Cost savings: at their most basic, gnocchi are just potato, flour, egg, salt and water, so they're pretty inexpensive; it's the sauces that may set you back more, so feel free to experiment and substitute with what you have on hand.

It takes a good 2 1/2 to 3 hours to roast tomatoes, so any of the dishes I've made with them will take at least the afternoon to prepare. Homemade roasted tomatoes are amazing--such a depth of flavor. Recipes include Creamy Roasted Tomato Gazpacho, Roasted Tomato Risotto, Tomatoes Two-Ways Pasta, Pizza, Roasted Tomato Panzanella and even Roasted Tomato Cocktails. Cost savings: although I strongly recommend using fresh, seasonal tomatoes, even grocery-store tomatoes will improve with roasting.

For lots of recipes, I turn to the 2- or 4-cup boxes of premade stocks and broths, which is an enormous time-saver for midweek cooking. But if you have the time, homemade stock is worth it. I've made two vegetable stocks that I really like: one for Navy Bean Soup with Kielbasa and another with Roasted Tomatoes that I used for making risotto. Cost savings: As money-saving dishes go, stocks are one of the best, since you can use whatever vegetables (including scraps) and seasonings you have on hand.

The fastest way to slow down a dessert is to add multiple stages. Ice cream pies, for example, require first making cookies and pulverizing them to form the crust ingredients, plus making the ice cream, before forming the crust, spooning in the ice cream and freezing it. It's a great way to showcase unique flavor combinations. Check out Cereal Milk Ice Cream Pie with Compost Cookie Crust or Blackberry-Vanilla Ice Cream Pie with Corn Cookie Crust. Cost savings: for the corn cookies, substitute either corn flour or a mix of fine corn meal and flour for the ground freeze-dried corn. Ingredients in the compost cookies can be substituted for whatever snacky things you have on hand--various chips, nuts, etc.

In addition to being a multi-stage dessert, Cereal Milk Baked Alaska with Brown Butter Cake requires extra time in the freezer between steps (very important time, by the way; the first time I made Baked Alaska I skipped some freezer time and really regretted it). Caramelized Parsnip Layer Cake requires extra time to first prepare, roast and mash the parsnips. Cost savings: for the cereal milk ice cream, substitute any flavorful sugary cereal for the Cinnamon Toast Crunch if you don't have that (Honey-Nut Cheerios would be good, I bet); carrots could be used instead of parsnips in the cake.
Posted by Cook In / Dine Out at 9:29 AM