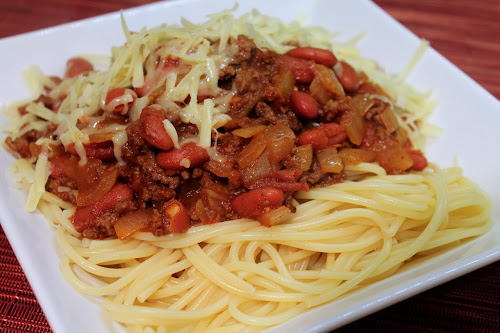 Cincinnati chili has to be one of the oddest dishes I've ever had. Geographically, it's all over the map. At its base is chili, the Tex-Mex staple, but spiced with a blend that's vaguely Middle Eastern and then served over noodles like a kind of spicy spaghetti with meat sauce. And it's from the Midwest.

I wouldn't dismiss this though just because it's weird. It's quite good, especially leftover the next day when all the flavors have had time to blend together well.


Since it has cayenne pepper in it, this chili is pretty spicy. In a way, it's spicier than the Chili Con Carne, which had more of a background heat to it.

When ordering Cincinnati chili, there's a code for how you want it that refers to the extras, which Wikipedia describes well. My chili sort of messes up the code system, since I added the beans to the pot instead of serving them as an extra, and I didn't include any additional raw onion. I guess that makes this a "four-way bean" sort of. 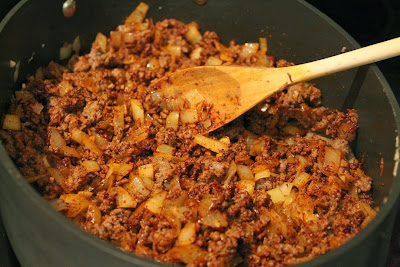 1. Heat a large sauté pan over medium-high heat. Add beef and cook until browned, breaking up with a wooden spoon. Remove beef from pan (or if using an oval sauté pan, push to one end).

3. Add the chicken broth, cider vinegar, Worcestershire sauce, tomato sauce, kidney beans and bay leaf to the pot. Increase heat and bring to a boil, then reduce heat to low and simmer uncovered for about 20 to 30 minutes until the mixture has thickened. Serve in a large bowl over spaghetti topped with a generous heap of shredded cheddar cheese.
Posted by Cook In / Dine Out at 12:00 AM