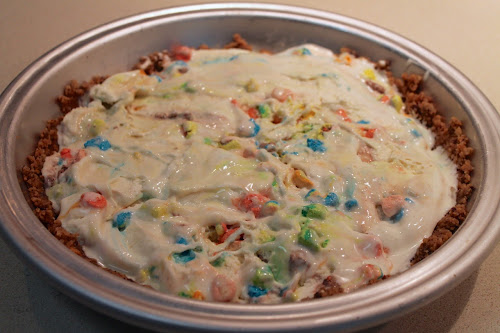 Yesterday I wrote about Compost Cookies and teased an even more epic dessert they were to be incorporated into. Here it is: Lucky Charms Ice Cream Pie with Compost Cookie Crust. Enough sweetness for you? 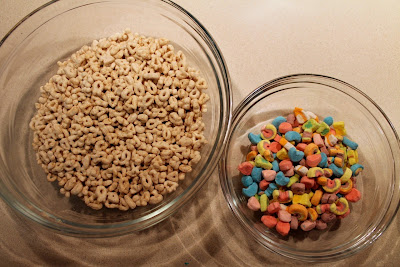 Like Compost Cookies, Cereal Milk Ice Cream is the creation of Momofuku pastry chef Christina Tosi. The basic principle is to saturate milk with the flavor of cereal--like the dregs in your bowl--then use that to make ice cream. For a baked Alaska last summer, I used Cinnamon Toast Crunch. For this pie, I decided to give Lucky Charms a try.

Because the marshmallow colors tend to run together and form a greenish-gray color, I picked the marshmallows out first, with the intention of stirring them back into the ice cream at the end. The remaining oat cereal pieces are surprisingly (or perhaps not, depending on your outlook of the cereal industry) sweet on their own, giving the ice cream a nice oat-sweet flavor. 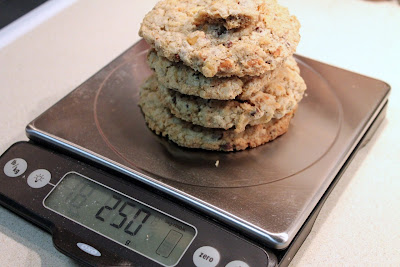 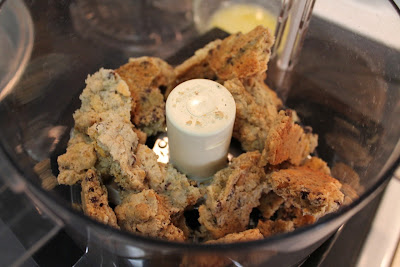 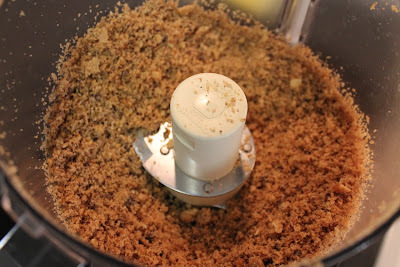 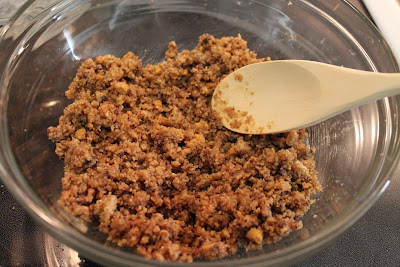 For the Compost Cookie crust, I first baked the cookies and then pulverized them with a little more added butter to form a cookie crust for the pie. In making the cookies, I deviated from Tosi's recipe by using graham cracker crumbs instead of her custom graham crust, which is a separate preparation of its own. Given all the flavors already going on in this dessert, I didn't miss it. The recipe from yesterday makes more than enough cookies for crust recipe; count yourself lucky that by making this you'll also get to enjoy a few compost cookies. They are amazing.

Perhaps the best part of making this dessert was that I got to showcase it alongside a group of coworkers' delicious creations in a Momofuku Milk Bar-themed afternoon dessert extravaganza. We all had sugar highs (and subsequent crashes) after that, but it was worth it.

1. Process cookies in food processor until ground to a fine crumb. Combine crumb in bowl with melted butter. Press evenly on bottom and sides of a standard pie plate. Refrigerate until ready to use.

2. Transfer the ice cream into the pie shell in an even layer.

3. Freeze pie. Let set out about 15 minutes before cutting and serving.

1. Separate Lucky Charms' marshmallows and oat shapes. Set the marshmallows aside. Pulse oat shapes a few times in a food processor to break them up a bit. In a large (4 qt.) saucepan, heat milk and cereal over medium heat until the mixture starts to bubble. Remove from heat and allow to "steep" for about 30 minutes. Strain cereal mixture, pressing with a spatula to get out as much milk as possible, to yield about 2 cups (add extra whole milk if you end up with less than 2 cups).

3. Meanwhile, in a small bowl, whisk together egg yolks. Whisk in about 1/2 cup of the warm cream mixture to temper the eggs, then whisk the egg mixture into the warm mixture in the saucepan. Continue cooking, whisking constantly, until the mixture reaches 180 F.  Transfer mixture to a large (1 gallon) resealable bag. Submerge in an ice water bath for about 10 minutes then chill in the refrigerator until cold.

4. Process in an ice cream maker following maker's instructions. Once finished, transfer ice cream to a container and carefully stir in the marshmallows (don't over-stir or their color will run). Put in freezer and freeze until ready to use for the pie.
Posted by Cook In / Dine Out at 12:00 AM