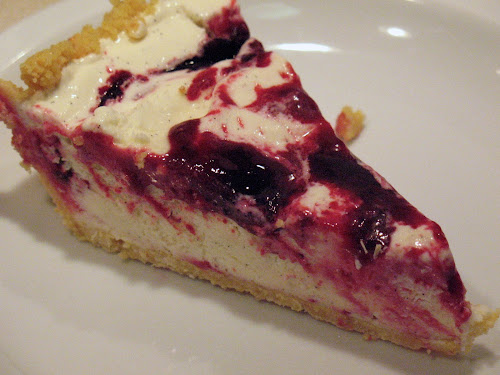 Ever since I made the first batch a few months ago, I've wanted to make corn cookies again. They were just amazingly good, perhaps the best cookie I've ever had.

I was also curious about trying the cookies as the crust for a pie. In the second issue of Lucky Peach, in addition to sharing the recipe for the cookies, Momofuku Milk Bar Pastry Chef Christina Tosi suggested a couple other uses for them, including crumbling them into a crust for ice cream pie. Sounds like a great idea if you can manage to squirrel away enough cookies to make a crust before they get eaten. 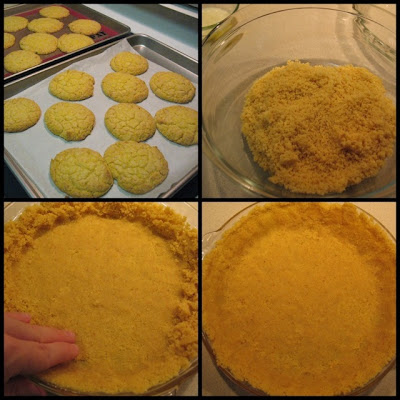 So what ice cream to use? Tosi suggested strawberry, but strawberries are no longer in season, and I wanted to make something really fresh. I turned to my favorite ice cream chef, Jeni Britton Bauer, whose Jeni's Splendid Ice Creams at Home cookbook includes a recipe for Sweet Corn and Black Raspberry Ice Cream (check out this great story about it). I like the idea of using a different berry, although I didn't want more corn competing with the corn cookie crust. I opted to make a basic vanilla ice cream swirled with blackberry sauce. 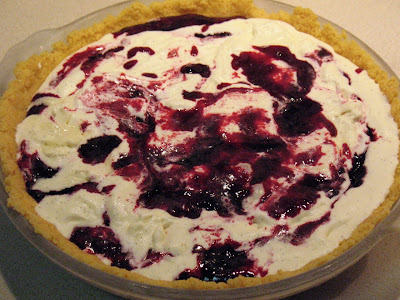 The pie turned out great, with the corn, blackberry and vanilla flavors harmonizing quite nicely. The crust is a bit hard to cut, so I always leave it out 15-20 minutes before cutting a slice (or two or...).

5-6 corn cookies (about 225-250 grams worth, see recipe)
3 tbsp. butter, melted
1 recipe blackberry sauce (see below), cooled
1 recipe vanilla ice cream (see below), freshly made but not frozen hard (if made in advance, leave out to soften about 20 minutes)

1. Process corn cookies in food processor until ground to a fine crumb. Combine crumb in bowl with melted butter. Press evenly on bottom and sides of a standard pie plate. Refrigerate until ready to use.

3. Freeze pie. Let set out about 15 minutes before cutting and serving. 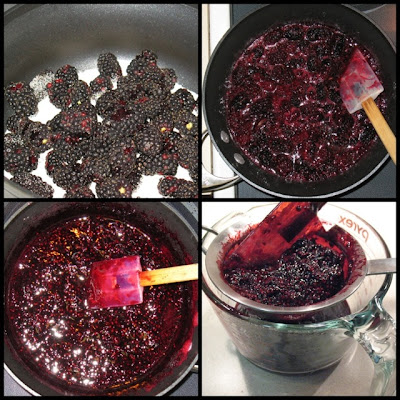 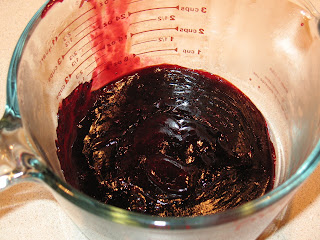 1. Combine berries and sugar in a medium saucepan and boil over medium-high heat. Cook, stirring frequently, until the mixture reaches 220 F, about 5 to 8 minutes. (Note: my mixture topped out at about 210 F, after which the temperature started to drop from the moisture loss. In the end, it turned out just fine, but be careful you don't continue to cook this too long and burn it just because the mercury doesn't get up as far as you like. It still turned out great). While cooking, use the side of a spatula to break up the berries.

2. Cool the sauce then pour it through a sieve to remove the seeds. Push on the mixture with a spatula to force it through the sieve. Refrigerate sauce until ready to use. Reheat gentry in a microwave (about 30 seconds on 50 percent power) if it is too stiff to layer with the ice cream.

1. In a small bowl, preferably a liquid measuring cup, whisk together 2 tbsp. milk with the cornstarch. In a large bowl, preferably something with a pour spout (like an 8-cup liquid measuring cup), combine the salt and softened cream cheese. Also, have a large bowl with ice water and a 1-gallon sealable plastic bag ready. Have all these things ready to use before you start cooking the ice cream mixture.

2. Add the remaining milk, cream, sugar and corn syrup to a large (4-quart) saucepan. Split the vanilla bean in half the long way and scrape the seeds into the cream mixture. Add the vanilla bean halves as well. Bring the mixture to boil over medium-high heat and boil for 4 minutes. Remove from heat and slowly whisk in the cornstarch slurry. Return to heat and boil an additional minute, stirring constantly as it thickens. Remove from heat.

3. Slowly whisk the hot cream mixture into the cream cheese until smooth. Pour the mixture into the sealable bag, seal the bag and submerge it in ice water. Chill for 30 minutes, adding more ice as necessary. If not processing right away, put in the refrigerator. Process in an ice cream maker according to manufacturer's directions. Freeze in the freezer until ready to use for the pie, if not ready to use immediately (if you freeze it hard, it will need to soften considerably before it can be spooned into the pie crust).