A Second Round of Oregon IPAs 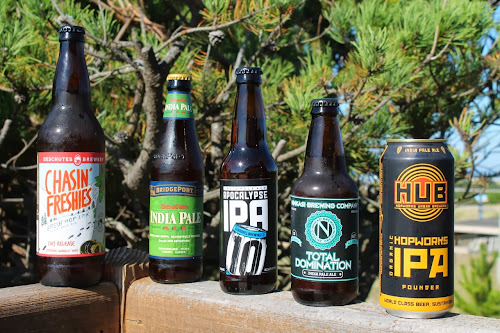 Following up on last year's post on Oregon craft ales, this year, during our annual fall trip to the state, we tackled a slate of IPAs to find our favorite for the season. We were surprised to find that last year's favorite, the Total Domination IPA by Ninkasi, while still good, was no longer our favorite this year. Instead that honor went to ...

Chasin' Freshies, fresh hop IPA, Deschutes Brewery. ABV (alcohol by volume): 7.2%. IBUs (international bittering units): 65. Our favorite IPA was this seasonal fresh-hopped selection from Deschutes Brewery. It's a nicely hoppy beer but with fruity, floral notes too. Clean and crisp with good body. Loved it so much I went back to the store and bought a second bottle.

Breakside IPA, Breakside Brewery. ABV: 6.5%. This one doesn't appear in the photo above since I had it on tap at Bar Carlo. Like this Chasin' Freshies, this is another very hoppy beer that's nicely balanced with fruit. It's definitely got the bitterness of an IPA but more quite refreshing too.

Apocalypse IPA, 10 Barrel Brewing Co. ABB: 6.8% IBUs: 70. This one didn't have the "wow" factor like Chasin' Freshies or Breakside, yet I found myself reaching for it again and again throughout the week. It's a nicely balanced IPA, with fruit and malt flavors balancing the bitterness.

Total Domination IPA, Ninkasi Brewing Company. ABV: 6.7%. IBUs: 65. Still strong enough to satisfy any hophead. This beer is bitter. Not particularly fruity or malty. It's all hops with a perfect medium body. I still enjoyed it, but it wasn't my favorite this year.

Hopworks IPA, Hopworks Urban Brewery. ABV: 6.5%. IBUs: 70. Despite its stated IBUs, this one didn't seem as bitter to me as several of the others. Body is on the lighter side with hints of fruit and citrus.

Bridgeport IPA, Bridgeport Brewing Company. ABV: 5.5%. IBUs: 50. The lower IBUs really shows here. It's much less assertive than the other beers. So, while perhaps not a choice for hop-heads, it's still a nicely balance beer with hints of fruit and malt.
Posted by Cook In / Dine Out at 12:00 AM