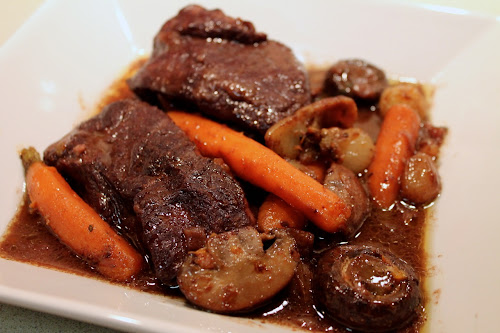 This is a classic that needs no messing with. Jacques Pepin’s Beef Stew with Red Wine Sauce ran in Food & Wine in April 2007 and again recently as one of the magazine’s 20 best ever recipes as part of their 35th anniversary celebration. 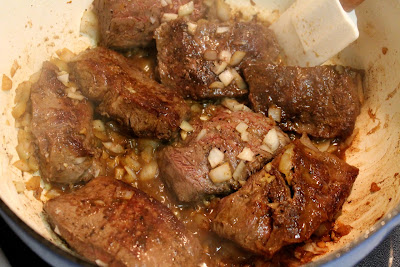 Food & Wine calls it the “quintessential” beef stew, and I couldn’t agree more. It’s really amazing. The dish gets its thick sauce from red wine—a whole bottle. There’s no broth or stock in this and just a little water for cooking the vegetables, which is done separately on the stove while the meat braises in the wine in the oven. There are also no potatoes, just onions and carrots, which are more flavorful choices. 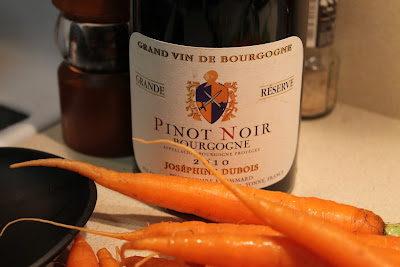 This recipe is not difficult, but it takes time—about 3 hours including the prep. The longest step is roasting the meat, which takes an hour and a half. The time is important, as that’s what makes beef stew work. It’s a process of cooking tough cuts of meat in liquid at a low heat for a long time to make them tender. As such, it’s a dish that’s been around a long time, probably since the dawn of humankind. 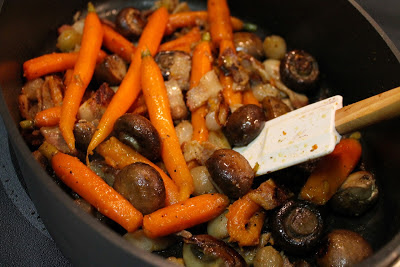 Chuck is a traditional choice for stew, but Pepin prefers flatiron, a relatively lean cut that is quite popular these days on restaurant menus. I made a few changes myself, although more from necessity. I neglected to get pancetta while I was at the store, so I used bacon instead, which worked great. I also forgot to get parsley and just omitted that. For the wine, I chose a burgundy, which basically makes this beef bourguignon. 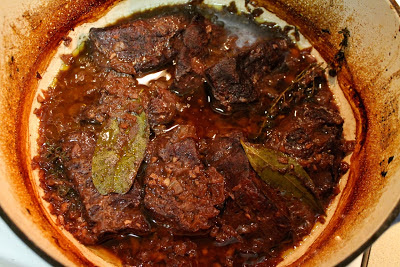 1. Preheat oven to 350 F. In an enamel-coated dutch oven or casserole, melt the butter in 1 tablespoon of the olive oil. Arrange the meat in the dutch oven in a single layer and season with salt and pepper. Cook over moderately high heat, turning occasionally, until browned on all sides, 8 minutes. Add the chopped onion and garlic and cook over moderate heat, stirring occasionally, until the onion is softened, 5 minutes. Add the flour and stir to coat the meat with it. Add the wine, bay leaves and thyme, season with salt and pepper and bring to a boil, stirring to dissolve any brown bits stuck to the bottom of the pot.

2. Cover the casserole and transfer it to the oven. Cook the stew for 1 1/2 hours, until the meat is very tender and the sauce is flavorful.

3. Meanwhile, in a saucepan, cover the pancetta (or bacon) with 2 cups of water and bring to a boil. Reduce the heat and simmer for 30 minutes. Drain the pancetta and slice it 1/2 inch thick, then cut the slices into 1-inch-wide lardons. (Note: I did this step in the large skillet used for step 4).

4. In a large skillet, combine the pancetta, pearl onions, mushrooms and carrots. Add the remaining 1 tablespoon of olive oil, 1/4 cup of water and a large pinch each of sugar, salt and pepper. Bring to a boil, cover and simmer until almost all of the water has evaporated, 15 minutes. Uncover and cook over high heat, tossing, until the vegetables are tender and nicely browned, about 4 minutes.

5. To serve, stir some of the vegetables and lardons into the stew and scatter the rest on top as a garnish. Top with a little chopped parsley, if desired.
Posted by Cook In / Dine Out at 12:00 AM