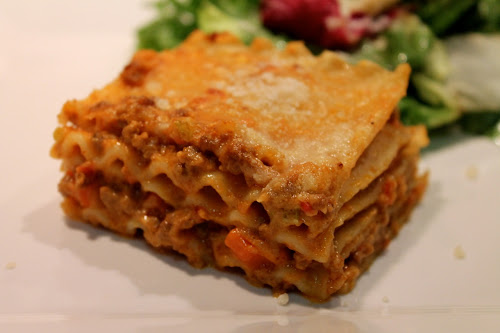 One of the great things about lasagna is how versatile it is. Last summer, I made a lasagna with seasonal vegetables, and at some point I hope to share with you my favorite fall version with roasted butternut squash, sage and goat cheese.

The version of lasagna most Americans know is the Italian-American one made with meat-tomato sauce and lots of cheese--ricotta, mozzarella and parmesan. Wanting to discover a more traditionally Italian method of making the dish, I went searching for a recipe by Marcella Hazan, widely credited as one of the foremost authorities on traditional Italian cooking.

I wished I'd had the foresight to just buy her cookbook, Essentials of Classic Italian Cooking, which I did pick up recently but not until after making the lasagna. Had I done so, I might have used homemade spinach noodles instead of the dried store-bought variety, which she says may save time but "you will be sadly shortchanged by the results." Er...sorry Ms. Hazan. Just don't use the "no boil" type, which I've not had good luck with unless the sauce is pretty thin, since they need the moisture to work right. 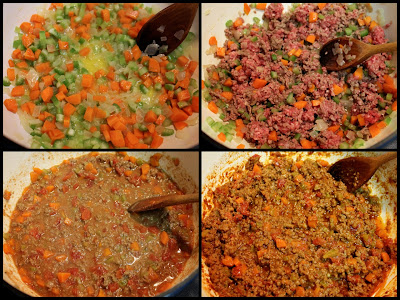 Regardless of how it could have been with homemade pasta, this lasagna was really quite good. Hazan's lasagna uses a bolognese sauce, which is like the meat-tomato Americans are familiar with but richer and made with more vegetables. Tomatoes are a component, rather than dominant. Instead of ricotta, the layers of pasta are spread with a thick béchamel. There's still plenty of parmesan, and I didn't miss the mozzarella. 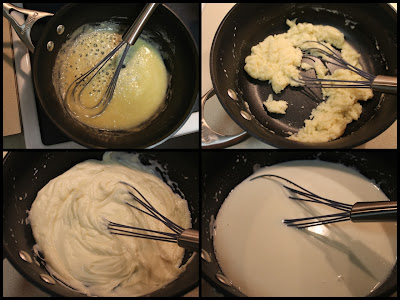 The steps for making the béchamel were different than what I'm used to. Normally, when I make béchamel for mac & cheese, I add the milk all at once and whisk it with the butter and flour until it's thick. Here, the milk is added and whisked in gradually, which at first makes dough, but eventually with all the milk added makes a thick, rich sauce with the consistency of sour cream. 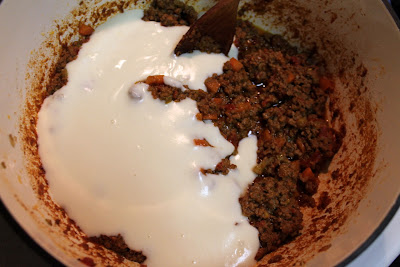 Carefully apportion your ingredients when you're ready to layer them. You don't want to run out of sauce before all the noodle layers are down. 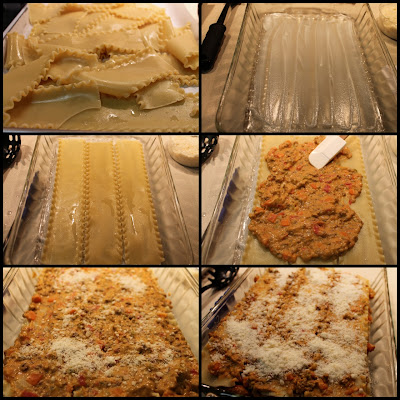 Like many dishes that have been around a very long time, the exact origin of lasagna is not clear, although it probably comes from ancient Greece. Of course back then, it wouldn't have had any tomatoes in it, since tomatoes are native to the Americas. I used half a can of Cento San Marzano peeled tomatoes, which are whole plum tomatoes canned in a thick tomato sauce. I froze the leftover tomatoes and sauce for later use. 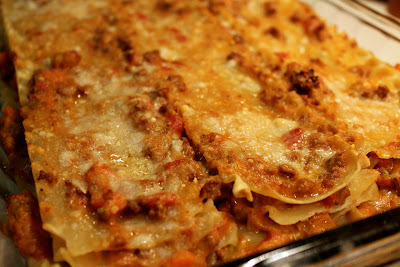 Some deviations below from the original recipe:

Make the bolognese sauce (takes about 4 hours, so plan ahead):

1. Heat a large sauté pan or Dutch oven over medium heat. Add butter and onion and cook until onion is translucent, about 5 minutes. Add celery and carrot and cook another 2 minutes. Add ground beef, salt and pepper to taste. Cook the beef until browned, breaking it up with a wooden spoon.

2. Add milk and simmer, stirring frequently until it has bubbled away completely (takes about 10-15 minutes). Stir in nutmeg. Add wine, simmer until evaporated (another 15 minutes or so), then add the tomatoes. When the mixture begins to bubble, turn the heat way down and cook uncovered at a very low simmer for 3 hours (yes this is a very long time, and even though the liquid will evaporate, the fat keeps this somewhat moist. That said, if it looks too dry, add a little water. Check it every 20 minutes or so). Don't proceed to the next steps until you're about 30 minutes from putting this in the oven, as the bechamel does not take long and you don't want it sitting around.

3. Preheat oven to 400 F with rack in second from top position (about 6 inches from top).

5. Heat milk in medium saucepan over medium heat until almost boiling (alternatively, and to avoid dirtying yet another pot, heat it in the microwave in a glass measuring cup).

6. Heat butter in a heavy saucepan over medium-low heat. When melted, whisk in flour. Cook, stirring constantly for 2 minutes. Do not brown flour. Remove from heat. Add 2 tbsp. hot milk and whisk to incorporate. Continuing adding and whisking in milk in 2 tbsp. increments until half the milk is incorporated. Then add 1/2 cup at a time util all the milk is whisked in.

7. Place saucepan over low heat, add salt and cook stirring constantly until thickened (should be thick like sour cream).

8. Coat the bottom of a 9 X 13 baking dish with butter. Spread 1 tbsp. of bechamel over butter. Lay down a layer of noodles (with standard lasagna noodles, 3 laid the long way should be enough for one layer, so with 18 noodles, plan to make 6 layers; with homemade noodles, you may need to do some cutting, be sure not to overlap noodles within a layer). Combine bolognese with remaining bechamel. Spread a layer of sauce on the noodle layer (aim to use about 3/4 cup of sauce per layer). Spread about 2 tbsp. of Parmesan over sauce. Repeat layering (noodles, sauce, parmesan), finishing with the extra parmesan on top. Bake until bubbly on the sides and golden on top, about 15 minutes, maybe a little more.

9. Remove from oven and allow to cool for about 10 minutes. Cut into 12 squares and serve carefully to retain stacked shape.
Posted by Cook In / Dine Out at 12:00 AM