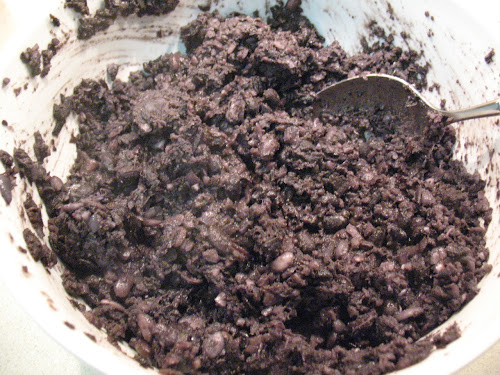 There are a lot of things I love about my local Tex-Mex restaurant, but unfortunately their beans are not one of them. They come rather soupy, while I long for the thick, crusted refried beans common to every Mexican restaurant I've ever had from the west coast. There are good refried beans in D.C., but they seem to be the exception.

For my recent taco night, I knew I had to have a side of refried beans. Rather than using the traditional pinto beans, I opted for black beans, which are generally my favorite type (Rosa Mexicano, by the way, makes decent refried black beans). The recipe I used, adapted from the New York Times, called for frying the beans in olive oil rather than lard. Less traditional, but healthier. I decided to give it a try.

Making the beans is a three-step process: 1) soak the beans, 2) simmer the beans, and 3) fry/mash the beans. Significant time is required for each step, so plan accordingly. I won't lie to you: this is a recipe that takes up a fair amount of your time.

Step one got off to a bad start when I woke up in the middle of the night and realized I'd forgotten to soak the beans (I think it was still enough time). 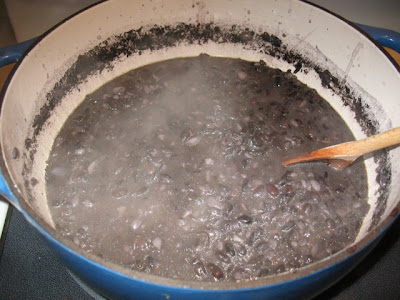 Step two went fine, except I think the beans would have benefited from simmering for at least another hour. They were quite tasty, but a bit chewier than I wanted, which also made them harder to mash by hand (and I didn't feel like getting out the food processor).

Stopping after step two would yield a flavorful bean side. But to really have "refried" beans, you have to live up to the name and cook them again, this time frying the reduced beans in olive oil for about 20 minutes per batch (and I divided mine into two batches), stirring as their water evaporates and mashing with the spoon. Eventually they will be quite thickened and a little crusty. Reserve some of the cooking water from step two in case they are too thick. 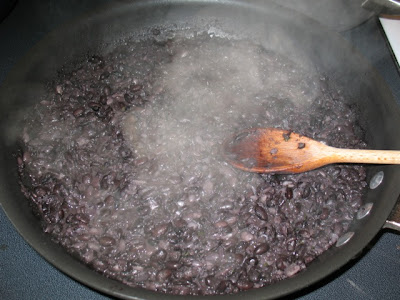 Flavor-wise, these beans were great, and had beautifully inky black color (their dark soaking liquid is used in the recipe, rather than discarded). But for better texture, I still say simmer them a bit more.

1. After rinsing the beans, place in a large bowl and cover with 2-3 inches of water. Soak overnight in the refrigerator.

2. In a large pot, heat 1 tbsp. olive oil over medium heat. Add onion and cook until it starts to soften, about 3 minutes. Add half the garlic and cook until fragrant, about another minute. Add the beans with their soaking water. Add additional water to cover beans with about an inch of water. Increase heat and bring to boil, reduce heat to low, skim off any foam, and simmer for an hour. Add salt, remaining garlic and cilantro and simmer for another 1-2 hours until beans are quite soft and the liquid has thickened.

3. Drain off about a cup of liquid from the beans and save it if needed later. Mash the beans coarsely with a bean or potato masher (or alternatively, but about half the beans in a food processor and pulse them a few times). Stir in the cumin and chili powder.

4. In a large nonstick frying pan, heat 1 tbsp. olive oil over medium-high heat. Add half the beans and fry, stirring frequently and mashing with the back of a wooden spoon, until the beans are very thick and begin to get crusty on the bottom, about 15-20 minutes. Repeat with the remaining olive oil and the rest of the beans. When cooked, if they are too thick, stir in some of the reserved liquid (I added about half of it back). Serve topped with crumbled Mexican cheese.
Posted by Cook In / Dine Out at 4:30 PM