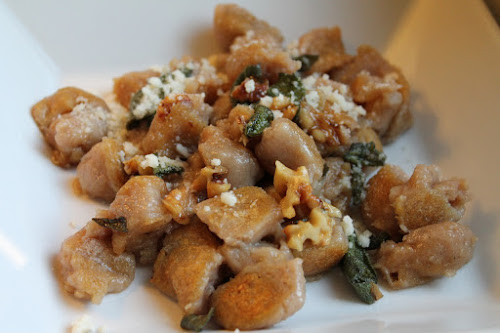 Gnocchi are traditionally made with starchy potatoes, but other vegetables, often in combination with potatoes, can be used too, to give the pillowy Italian dumplings different color and flavor. Mark Bittman's "Gnocchi of a Different Color" piece from the New York Times in February illustrated the concept well, starting with a base recipe that moves on to offer a variety of color/flavor options (beet, spinach or carrot) and sauces. Rather than use one of his sauces, I went with the walnut-sage butter from the April 2013 Food & Wine. 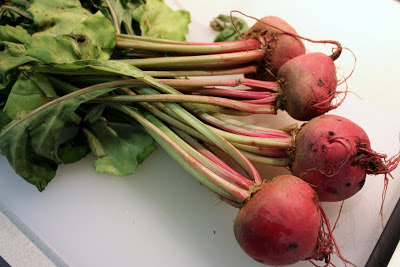 This dish was delicious, but didn't quite go as I'd planned. First, I was expecting to make boldly purple gnocchi, but instead ended up with the nutty brown ones pictures above. Not unappealing at all, but I think the reason for this was: 1) without knowing it, I bought striped beets instead of the purple ones. I thought the resulting product might actually be sort of pink, but then there's: 2) I think I sautéed the shredded beets at too high a temperature and they browned a bit in the pan. If color is really important to you, be sure to carefully select the beets you use and cook them at a lower temperature. Alternatively, you could roast them along with the potatoes and then puree them in the food processor. Regardless of the lack of visual, the gnocchi did have a nice beet flavor.


The other issue I had was structural: some of the gnocchi lost their shape while boiling. Mark Bittman's recipe suggested test-boiling a little piece of the dough and, if it doesn't hold together, adding more flour. I should have trusted Mr. Bittman, but I neglected to do this.


Flour is the tricky element of gnocchi: add too much and they can become dense; add too little and you get soggy gnocchi. In the end, to give yourself more leeway, I think it's helpful to add an egg to act as a binding agent. Although some suggest this can also make the gnocchi heavy, when I've made it before with egg (here and here), I thought the results were perfect. To address the problem in this dish, I sautéed the cooked gnocchi in butter, which firms their exterior a bit.

1. Heat the oven to 400 F. Bake potatoes until tender, about an hour. Cut the potatoes in half to release steam. When cooled enough to handle, press potatoes through a potato ricer (when using a potato ricer, it's not necessary to peel the potatoes - place the potatoes cut-side down in the ricer and, after squeezing, the peel stays in the device).

2. While the potatoes bake, peel and grate the beets (I shredded them in a food processor). Put the oil in a medium saucepan over medium-low heat, add the beets, season to taste, and cook, stirring occasionally, until very soft, 25 to 35 minutes (note: watch the beets carefully if you don't want them to brown, which will affect the color of the finished gnocchi). Transfer beets to a food processor and purée until smooth.

3. Combine potatoes and beets in a large bowl. Transfer to a clean counter surface (I use a pastry mat). Sprinkle with 1/4 cup of flour and knead the flour into the dough, sprinkling in the remaining 1/2 cup of flour until the dough just comes together. (Note: the original recipe recommends pinching off a piece of flour and boiling it to test whether the dough holds together and, if it doesn't, says to add more flour. I should have done this, given that I had trouble with some of the gnocchi not holding their shape, although I did significantly more flour in forming the gnocchi anyway.)

4. Divide the dough into smaller pieces and roll into ropes about 1/2-inch thick. Cut the ropes into 1/2-inch pieces. (Note: if desired, score each piece the times of the a fork. This gives gnocchi their traditional ribbed look, but it is not necessary). Transfer formed gnocchi to a baking sheet lined with parchment.

5. Bring a large pot of salted water to boil. Add the gnocchi to the boiling water a few at a time, gently stir and cook until the gnocchi rise to the surface (it doesn't take long). Remove gnocchi with a slotted spoon or mesh strainer.

6. In a small frying pan, toast the chopped walnuts over medium-low heat, tossing frequently, until lightly browned and fragrant.

7. In a large skillet, heat 2 tbsp. of butter over medium heat (you may substitute olive oil or a mix of both). Add sage, and cook for about 20-30 seconds. Add cooked gnocchi and sauté until the gnocchi lightly brown, about 2 minutes (stir to brown evenly). If frying gnocchi in batches, add additional butter and/or olive oil to the skillet. Stir in the walnuts and lemon juice, season as desired with salt and pepper and add back any gnocchi previously cooked in an earlier batch, stirring gently to combine all the ingredients. Serve in bowls with grated parmesan for topping.
Posted by Cook In / Dine Out at 12:00 AM