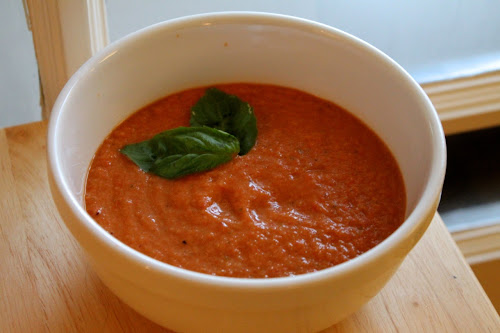 Lately, I've become kind of obsessed with roasted tomatoes. Most Sunday afternoons for the last month I've had the oven on for hours, slowly roasting 3 or 4 lbs. of beautiful ripe summer tomatoes until they develop deep umami flavors. That's not being pretentious: tomatoes are high in glutamates, a principal source of umami, and roasting tomatoes brings that flavor out even more.


This recipe is very close to the Creamy Andalusian Gazpacho I wrote about last year, except that I've substituted roasted tomatoes for fresh ones and also simplified it a bit by removing the step of salting the vegetables and reserving a few diced vegetables to add in the end. This is a smoother gazpacho with an even richer tomato flavor. It goes great with a simple green salad.

The broth for this comes from the Roasted Tomato Risotto I wrote about Wednesday. That recipe produced a lot more broth than I needed for the risotto, so I used some to make this dish. The recipe for the broth below is the same as for the risotto, except that I didn't indicate reserving any of the roasted tomatoes. Certainly, if you're going to make this recipe without first making the risotto, I'd recommend roasting all the tomatoes at once in two roasting pans.

1. Preheat oven to 350 F. Toss cut tomatoes with 2 tbsp. of olive oil and a sprinkle of salt. Roast for 3 hours, stirring at each hour mark. Let tomatoes cool and store in the refrigerator until ready to use (be sure to keep the tomatoes and any juices in the pan). This makes about 1 cup of roasted tomatoes. Set aside to cool until ready to use.

2. Preheat oven broiler. Spread red pepper on a baking sheet, spray or brush with olive oil and broil for 4 minutes flesh side up, flip and broil 2 minutes more. Set aside to cool, then dice.

3. Roughly chop the roasted tomatoes, cucumber, onion and the garlic. Transfer the diced vegetables and bread cubes to the blender with the other 1/2 cup of broth, sherry vinegar and basil leaves. Blend on medium speed for about 30 seconds. With the machine still running, through the opening at the top, slowly drizzle in the 1/2 cup of olive oil. Add additional tomato broth, as necessary, to reach a desired consistency (it shouldn't be too thick, but nor should it be runny either). Season with freshly ground black pepper. (Note: If you're blender isn't high capacity, you may want to make this in two batches and then mix them together.) Serve soup in bowls garnished with basil leaves.

1. Preheat oven to 350 F. Toss cut tomatoes with 2 tbsp. of olive oil and a sprinkle of salt. Roast for 3 hours, stirring at each hour mark. Let tomatoes cool and store in the refrigerator until ready to use (be sure to keep the tomatoes and any juices in the pan). This makes about 1 to 1 1/2 cup of roasted tomatoes.

2. Add roasted tomatoes to a Dutch oven or other large pot along with the fennel, sweet onion, garlic cloves, summer savory, 2 tsp. salt, freshly ground black pepper to taste, and 10 cups of water. Bring to a boil, then cover and reduce heat to simmer for about 2 hours. Strain the mixture with a metal sieve, using a wooden spoon to squeeze moisture out of the vegetables (especially the tomatoes). This should yield about 8 to 9 cups of broth. Store in the refrigerator until ready to use. (Note: this is a lot more than you'll need for the gazpacho--use the rest to make Roasted Tomato Risotto).
Posted by Cook In / Dine Out at 12:00 AM