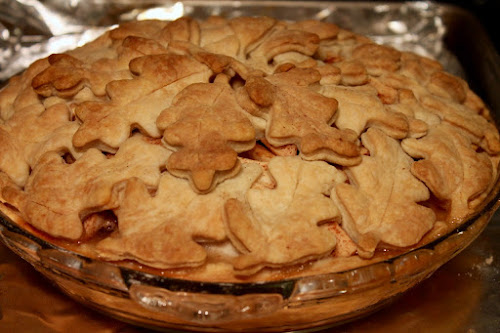 I've covered apple pies with a plain crust and a lattice, but for this pie I wanted to get more decorative. I've seen pies decorated with cutouts and the idea in Fine Cooking magazine to use overlapping leaves seemed perfect for Thanksgiving, everybody's favorite fall holiday.

The Fine Cooking recipe calls for cutting each leaf by hand, as well as making smaller leaves. I cheated a little bit: I used a leaf-shaped cookie cutter. This worked great, as each leave was the same size--about 3 1/2 inches long by 2 inches wide. I scored a line down the middle of each leaf with sharp knife (do this carefully to prevent cutting all the way through the dough). 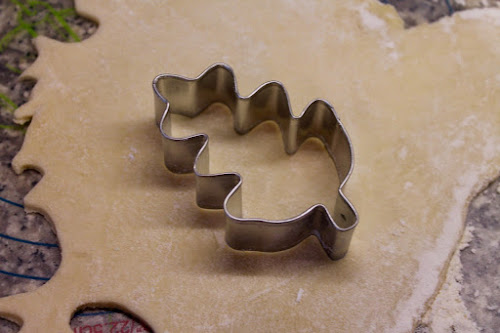 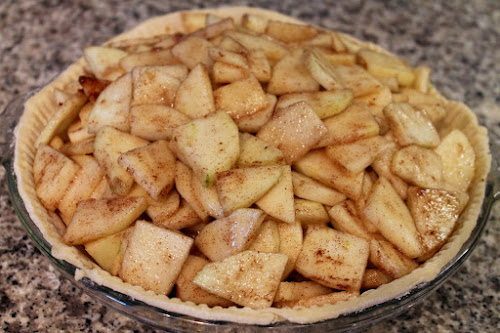 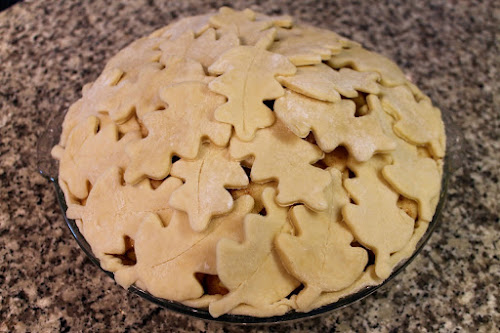 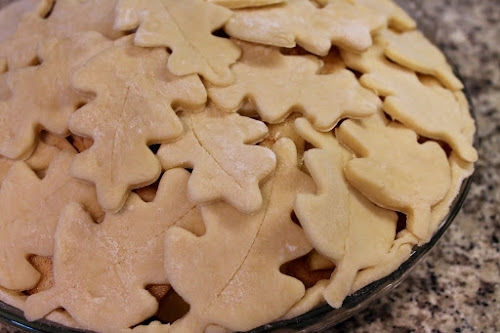 When placing the leaves on top of the pie, they should overlap just slightly. If your leaves are cut to the same size as mine, you'll need 24 leaves to complete the top. Start with the outer ring and place 14 leaves flush against the edge of the pie plate. Then, complete the inner ring with 9 leaves. Finish with a final leaf in the center.

Since I've had such good luck with it in the past, I switched up the crust recipe and used my trusty "foolproof" double-pie crust with vodka recipe from America's Test Kitchen. 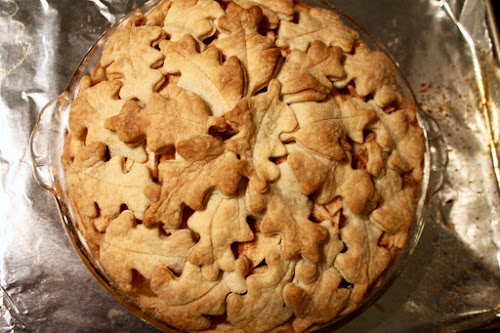 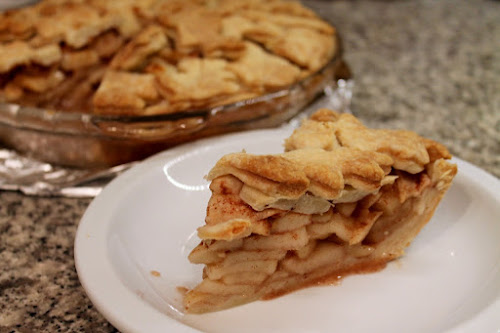 4. Combine any scraps from the first disc with the second disc and roll out the dough to 1/8 inch thick. With a paring knife or a leaf cutter, cut out at least 24 leaves 3 1/2 x 2 inches in size. With the paring knife, score a "vein" down the center of each leaf, being careful not to cut all the way through the dough. Place the cut leaves on a floured baking sheet (don't stack them) and set them aside in a cool place.

5. Cut the apples into 1/4-inch slices--there should be about 7 cups. Put the apples in a large bowl and add the sugar, flour, cinnamon, nutmeg, and salt. Toss gently to coat the apples with the flour-sugar-spice mixture. Transfer the apples to the cooled pie shell, tucking in any apples to create a slight dome in the center. Dot the apples with large flecks of the remaining 1 to 2 tbsp. of butter.

6. Starting at the rim of the pie plate, place the leaves at a slight angle and slightly overlapping around the edge of the pie until the leaves go all the way around. Then make a second smaller circle of leaves closer to the middle of the pie--finishing with a final leaf in the middle. Chill the pie in the refrigerator for 15 minutes.

7. Position two racks close together in the lower third of the oven, set a foil-lined baking sheet on the lowest rack to catch any drippings from the pie. Heat the oven to 350 F.

8. Bake the pie on the second-lowest rack until the crust is a deep golden brown all over and the apples are tender when pierced with a thin knife blade, about 60 to 80 minutes (I baked my pie for 85 minutes). Let the pie cool completely before serving.