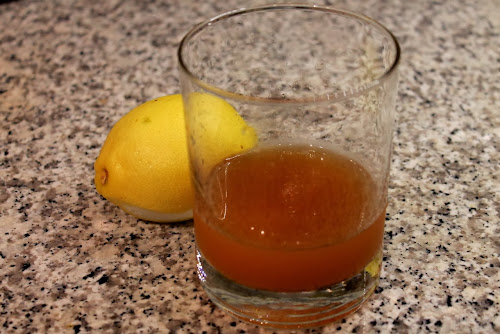 Here's a strange but true fact about pumpkin drinks: a lot of them contain no actual pumpkin. Rachael Ray's Pumpkin Pie Martini? No pumpkin.

This isn't true of just cocktails. Starbucks' pumpkin spice latte, for example, contains the spices common to pumpkin pie (cinnamon, nutmeg and clove), but no actual pumpkin, a fact that dazzled the Daily Mail recently, but which has been pretty well-known for a long time.

For these cocktails, I made a syrup with pumpkin puree and traditional pumpkin pie spices: cinnamon, ginger, allspice, nutmeg and clove.

The pumpkin flavor is subtle but apparent in both drinks. The first is a riff on the classic Sazerac, a drink traditionally not served on the rocks (but I'll admit to throwing in a couple rocks, since otherwise it's rather potent), and the second a refreshing gin drink with apple brandy.

I leaned on Jeffrey Morgenthaler's great piece on the proper technique for making a Sazerac.

Add a little bit of absinthe to an empty rocks glass, swirl the liquid around and dump it out. In a separate mixing glass filled with ice, add whiskey, syrup and bitters. Stir until well chilled. Strain mixture into the rocks glass. Twist the lemon peel over the glass to express its oils into the drink; discard peel. 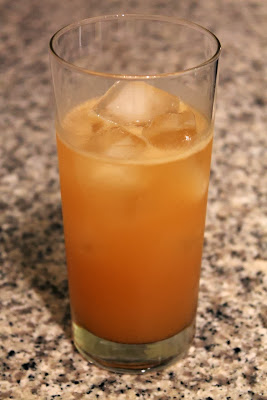 Combine gin, apple brandy, pumpkin syrup, lemon juice and angostura bitters in a shaker with ice. Shake until cold. Pour into a highball glass with ice. Top with club soda and stir to combine.

1. Combine all ingredients in a saucepan and bring to a boil, stirring until the sugar has dissolved (it's kind of hard to tell that it's dissolved since the puree makes the mixture cloudy, but after a couple minutes, it will be dissolved). Remove from heat and set aside to cool for about 15 to 20 minutes.

2. Set a fine-mesh strainer over a bowl or glass measuring cup and transfer the cooled mixture to the strainer. Resist the temptation to speed it up with a spatula, since that will force puree through the seive. You should get about 3/4 cup of syrup. Transfer to a sealable container and keep in the fridge.
Posted by Cook In / Dine Out at 12:00 AM