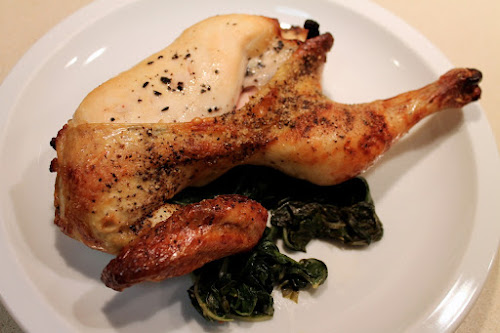 You might say, what about the chicken at Zuni Café? Yes, that is very good.  Chris and I had it in San Francisco 2 years ago. I love their bread salad and I make that dish all the time. But when it comes to the chicken itself, Palena’s is superior.

Okay okay, but certainly Palena’s chicken isn’t better than The NoMad’s, you’re thinking. It’s the talk of New York City with its luxurious under-skin stuffing of foie gras and truffles. Admittedly, keeping the chicken breast moist with foie gras is an interesting idea, and although we enjoyed it during our last New York trip, the whole time we kept talking about how it was good, but it wasn’t Palena. Chef Frank Ruta is just a genius with poultry. 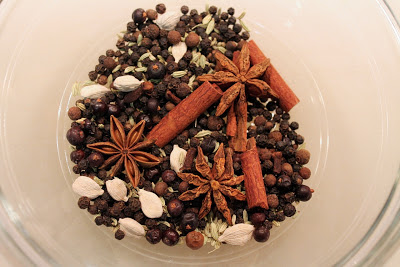 So what makes Palena’s chicken so special? That’s the question I wanted to answer with this dish, my attempt to make a Palena-esque chicken with juicy, flavorful brined flesh and crispy browned skin. 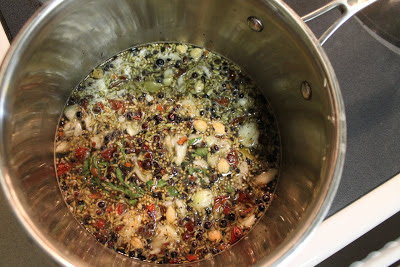 Answering the question isn’t so easy, as Ruta has been secretive about his recipe. It’s not the one on Food & Wine, which sounds good but lacks the flavor complexity of the Palena chicken, which everyone assumes has been brined in a combination of herbs and spices. Last August, I asked Washington Post restaurant critic Tom Sietsema if he knew the secret. Sietsema went to the source who revealed that he brines a 2 ½ to 3 pound chicken in sweet spices and garlic with “more herbs in summer, more citrus in winter.” So I was partway there but not really sure what the “sweet spices” could be. Clove seemed liked a definite, maybe some cinnamon. 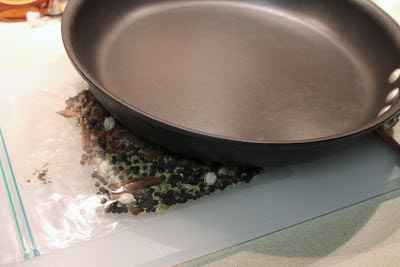 Thankfully, I found this lively discussion on DonRockwell.com where members have had a years-long discussion trying to crack the Palena chicken code. From this, I got lots of good intel about the possible brine ingredients and techniques from which I based my recipe. Salting the brine was a bit of an issue. I needed enough for the brine to work, since the salt is what draws moisture from the chicken, which is then replaced by the salt-rich fluid in the brine. Since I’d used ½ cup of kosher salt to brine my Thanksgiving turkey breast, I figured 1/3 cup (specifically 2 oz.) would be sufficient for the smaller chicken.


I’d never cut a whole chicken in half before, so I was grateful for this video that shows how to do it. I also cut the ribs out, since they were a bit sharp after I removed the backbone.

After brining the chicken for 20 hours, I took it out of the brine, rinsed it, patted it dry with paper towels and placed it on a cooling rack set in a baking sheet that I would eventually use for roasting it and let it sit in the refrigerator for 6 hours. This is an important step for helping the skin brown: allowing it to air dry, since moist meat will cook but not brown well.


As a final rich touch and a nod to The NoMad, I spread truffle butter between the skin and breast and drumstick meat. I used 2 oz., but I think 1 oz. would have sufficed, since a lot of this melted and dripped off. In their Science of Good Cooking cookbook by America’s Test Kitchen, the recipe for roast chicken discusses how putting the butter between the skin and the breast meat is preferable to putting it on the skin, since the moisture in the butter inhibits browning.


I roasted the chicken in a hot oven, covering it with foil once the skin had browned sufficiently. I’d had a blowtorch on hand for finishing this, but it proved to not be necessary. Since Palena serves their chicken with lemon-braised greens (chicory and escarole according to the server last time I was there), I served mine over braised Swiss chard with lemon.


I was generally please with how this turned out. The flavor was really good: rich and deliciously spicy not unlike what you get at Palena. The skin crisped nicely too. The only thing I wasn’t happy about was how the skin pulled back off the breast meat, probably a result of being cut and then shrinking as it cooked. However, since the breast meat was sufficiently juicy from the brine, this didn’t cause it to dry out. Overall, I’d say this was a definite score. If you’re a fan of Palena’s chicken, you might enjoy giving this a try. And if you’re not a fan of the chicken, you must not have had it yet.


Spice-Brined Roast Chicken
Inspired by Frank Ruta’s Palena Roast Chicken with much input from the contributors to the DonRockwell.com Palena Chicken Project discussion

2. In a 4-quart saucepan, heat 2 cups of water over medium-low heat to simmer (do not boil). While water heats, add the crushed spices, salt, sugar, bay leaves, thyme, nutmeg, vanilla, garlic, tarragon, and honey. Stir until sugar and salt are dissolved. Allow to cool. Add lemon zest and juice.

3. Rinse the chicken and pat it dry. Cut the chicken in half by removing the backbone and cutting down the middle of the breastbone. Discard backbone and any included giblets (or use for something else). Combine cooled spice mixture in a large (2 ½ gallon) sealable bag with 3 quarts of cold water. Add chicken halves. Seal bag and refrigerate to brine over night for about 20 hours.

4. Remove chicken from brine, rinse, pat dry with paper towels and place on a cooling rack set inside a baking sheet and place in the refrigerator to air dry for 6 hours.

5. Preheat oven to 450 F with rack in middle position.

7. Place the chicken on the rack set in the baking sheet in the oven and roast for 20 minutes. Check chicken. If skin has browned sufficiently, cover with aluminum foil. If not, check again in 10 minutes and cover, if needed, to prevent burning. Reduce heat to 425 and continue roasting until instant-read thermometer reads 160-165 F, about 45 to 60 minutes total. Remove chicken from oven. Serve on top of lemon-braised greens (recipe follows).

Remove chard stems and cut leaves in half to make two long halves, then chop across the leaves to make pieces about 1 ½ inches wide. Heat olive oil in a large sauté pan over medium heat. When hot, add chard and sauté until wilted, about 3-4 minutes. Season with salt, pepper and lemon zest as it cooks. Add chicken broth, cover and reduce heat to medium low. Simmer chard about 10 minutes. Remove lid, add lemon juice and continue cooking until the chard is tender, another 5 minutes. Remove with tongs or slotted spoon to leave excess moisture in pan.
Posted by Cook In / Dine Out at 12:01 AM