Toasted Fazzoletti with Mushrooms and Hazelnuts 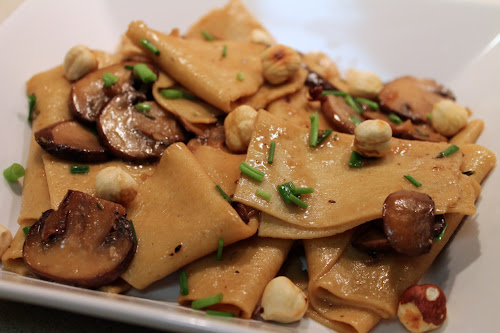 Today is the Day of the Mushroom, an apt time for this food holiday to come along when mushroom fanatics are busy foraging for all sorts of unusual varieties of fungi.

Originally, I had planned to celebrate this day with Funghi Calabresi from the Mario Batali Cooks mobile app. But the recipe was so poorly written that I was not entirely sure what I was doing was correct. The results were fine, but not Day of the Mushroom-worthy.


Thankfully, the April issue of Food & Wine has a great recipe to showcase mushrooms: Toasted Fazzoletti with Chanterelles and Hazelnuts. The toasted pasta flour and nuts complement the mushrooms' earthiness. And Fazzoletti is one of the easiest pastas to make at home, since it requires no precision cutting.


The homemade fazzoletti takes some time to make due to several steps of resting time for the dough, so be sure to plan ahead to allocate enough time. The dough recipe was a little challenging, but not insurmountable. Be sure to watch the flour while it roasts, since it could burn. I removed mine from the oven a little earlier than the recipe called for, since I was concerned it could smoke.


Another challenge with the dough was getting the consistency right. When it came time to roll it out in a pasta machine, it was really sticky. As I kneaded the dough, I added a generous amount of additional flour. After it seemed the pasta flour alone wasn't going to produce a smooth enough dough, I added all-purpose flour, which made the dough a little softer and thus easier to work with.

As I mentioned earlier, fazzoletti are easier to deal with than say linguine or fettuccine, in part because you can just cut the dough into random squares. The recipe called for making 2-inch squares, but rather than discard a lot of little pieces, I made mine more irregular. In the final dish, when the pasta ends up folded into random shapes anyway, it doesn't matter how perfect they are. In fact, I rather like the more rustic look of their irregularity. Be sure not to cook the noodles ahead of time, since they will stick together (prying apart hot noodles is a pain--speaking from experience here).


Mushroom aficionados will want to use the chanterelles as called for in the recipe or another interesting mushroom. Unfortunately, Whole Foods stopped their unusual mushroom promotion the weekend I was buying ingredients for this dish, so I had to settle for cremini mushrooms, which were still quite delicious.


1. Preheat the oven to 375 F. Spread the hazelnuts in a pie plate or on a baking sheet and toast for 12 minutes, until the skins split and the nuts are fragrant. Allow the nuts to cool a bit, then transfer the nuts to a clean kitchen towel, fold the towel the nuts and rub the nuts vigorously between the two layers of towel to remove the skins. Coarsely chop the nuts, if desired (I left mine whole).

2. In a large, deep skillet, cook 4 tbsp. of the unsalted butter over moderate heat until lightly browned, about 3 minutes. Add the mushrooms, season with salt and pepper and cook over medium-high heat, stirring occasionally, until all of the liquid has evaporated and the mushrooms are golden, about 8 minutes. Add the shallot, thyme and crushed red pepper and cook over moderately high heat for 5 minutes, stirring frequently. Add the vinegar and cook until evaporated, scraping up any browned bits from the bottom of the skillet. Add the stock and simmer until reduced by half, about 10 minutes. Season to taste with salt and pepper.

In a large pot of salted boiling water, cook the fazzoletti until al dente, about 3 minutes (I recommend cooking them in two batches to avoid crowding the pot). Drain and add the pasta to the skillet, along with the remaining 2 tbsp. of butter. Cook over moderate heat, stirring, until the pasta is coated with butter. Stir in the chives and serve in shallow bowls, garnishing with the toasted hazelnuts.


1. Preheat the oven to 375 F. Spread 1 cup of the flour on a baking sheet and toast for about 30 minutes, stirring once, until fragrant and honey-colored (I pulled mine a little sooner, about 25 minutes total). Let the flour cool.

2. In a food processor, combine the toasted flour with the remaining 2 cups of flour and pulse. With the machine on, add the eggs, milk and salt and blend until the dough comes together; turn out onto a floured work surface and knead 2 or 3 times to form a soft, supple dough. Wrap the dough in plastic and let stand at room temperature for 2 hours.

3. Cut the dough into smaller pieces (judge this based on your pasta machine; the original recipe said 4 pieces, but I did 8, since that worked better in my pasta machine). Using a pasta machine on the thickest setting, run 1 piece of dough through the machine, dusting with flour. Fold the dough in thirds and run it through the machine at the same setting. Continue to run the dough on successively thinner settings until you are 1 setting from the thinnest (I made the dough a little thicker than this--setting 4 on a Kitchen Aid pasta machine). Dust the dough with flour and drape over a floured work surface while you repeat with the remaining dough. Cut the pasta into 2-inch squares and dust lightly with flour. Let the squares stand at room temperature for 1 hour, tossing occasionally.