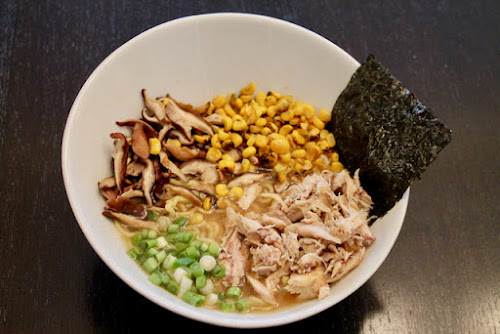 One of the things I've missed during the pandemic is going out for ramen. Near where I work in downtown D.C., there are several very good ramen restaurants, and near the Atlantic Plumbing movie theatre where we used to go to see movies, was another one--all three (Daikaya, Bantam King and Haikan) owned by the same group. Of the three, Bantam King, which specializes in chicken-based ramen, is my favorite. I've had many meals there with friends and colleagues and look forward to (hopefully soon) being able to eat there again.
Until then, I've been making ramen at home. This is my ode to Bantam King's chicken ramen. The recipe here is for a miso rendition (spicy or not), but if you substituted soy sauce for the miso, you could instead have a very decent shoyu version.
Fresh ramen noodles are what makes this dish truly special. The Nona Lim brand available at Whole Foods are quite good. Each box is two servings, so you'll want two boxes for this recipe, since it makes 4 servings total. If you can't find fresh noodles though, substitute dried ones--they will be good too.

Fresh ramen noodles (follow package directions to use one serving per person, may substitute dried ramen if fresh not available, but strongly recommend taking the time to look for fresh ramen)
Nori sheet, cut into about 4 x 8 inches
1 bunch of scallions, white and green parts chopped

2. Stir in the shallots, garlic and ginger, and continue cooking a few more minutes, stirring occasionally, until the garlic and shallots are fragrant.

3. Add the chicken stock/broth, stir the pot to make sure nothing is stuck to the bottom, increase heat to high and bring to a boil. Cover pot, reduce heat to a simmer, and simmer for about 3 hours. Remove the chicken wings and transfer to a plate to cool. Strain the broth by removing large pieces with a spider strainer (this will leave some little bits behind--if you prefer a finer strain, pour the broth through a fine-mesh sieve). Stir in the miso (I recommend starting with 2 tablespoons, then tasting to see if its salty enough for you, adding more as desired). If you like spicy broth, stir in the gochujang chili paste (note: you can always stir it in after apportioning the broth for each bowl, if some people like spicy and others don't--personally, I love it).

Make the ramen and assemble:

1. Once the chicken has cooled, pull off the skin (and discard) and remove the best meat from the wings, being sure not to include any gristle. Set aside the meat until ready to serve and discard the bones and gristle.

3. Bring a large pot of water to boil. Cook the ramen according to package directions. Err on the side of undercooking just a bit so the noodles will be a little chewy.

4. Assemble the bowls: Add a serving of ramen to a large bowl. Nestle a sheet of nori next to it. Pour in about 1 1/2 cups (or more/less as desired) of broth--enough so that the noodles are covered. Top with chicken, mushrooms, corn and scallions. 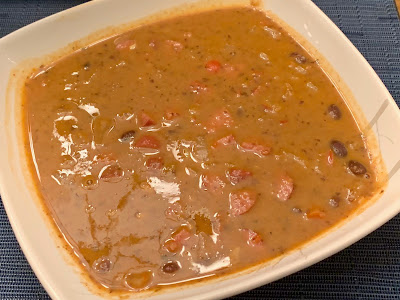 This is an updated version of the recipe I posted 6 years ago. I’ve made enough changes to it that I wanted to share it again, as I like this version better. This is such a wonderful weeknight soup—it really does come together quickly. And it’s very satisfying.

The most noticeable change is that I now puree some of the soup. This makes it thicker, and I really like the texture. Since I don’t want the meat pureed, I now heat the kielbasa separately, tossing it in toward the end after some of the soup has been pureed. I’ve also added red bell pepper, which makes it a little sweeter. Most recently, I diced the kielbasa, instead of just slicing it into coins like I normally do. Another win! I thought the coins were always too large in comparison to the other ingredients.

I like this spicy, but not too spicy. I once tried making this with a full teaspoon of chipotle chili powder, and I thought it was too hot. Most recently, I used a half teaspoon—and then added just a little bit more (maybe 1/8 tsp more), and it was perfect.

1. Heat the olive oil in a Dutch oven over medium heat. Add the onions, bell pepper and garlic. Season with salt and sauté until the onions have softened and are starting to brown, about 8-10 minutes.

2. Heat a small frying pan over medium heat. Add the diced kielbasa and cook, stirring occasionally until it starts to lightly brown (last time I did this, it was too juicy to brown, but that was fine, as it’s already cooked, so it just needs to be heated).

4. Partially puree the soup: Remove about half the soup (about 3 cups) and either 1) transfer to a blender or food processor and puree, or 2) transfer to an appropriate container and puree with an immersion blender.

5. Add the kielbasa and pureed portion of the soup to the soup pot and stir to combine. Taste, adjust seasoning and serve (if desired topped with a dollop of sour cream or a sprinkle of shredded cheese). 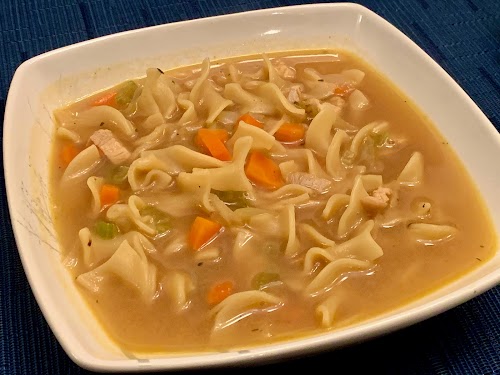