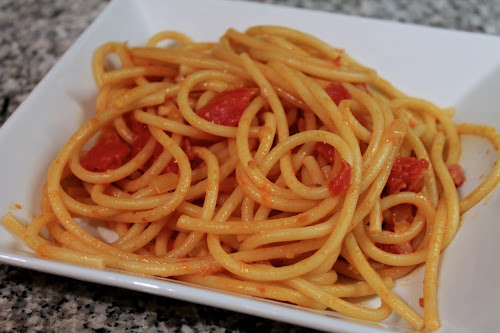 “Do not be alarmed by the amount of garlic this recipe requires.”

This line caught my eye and made me chuckle. It’s on the opposing page in Essentials of Italian Cooking from the recipe I made below, in reference to the 5 cloves of garlic in "Tomato Sauce with Garlic and Basil." With a title like that, you might expect a whole head in the sauce, but Ms. Hazan is being polite and reassuring a perhaps novice Italian cook into realizing that garlic, off-putting to some for its pungent aroma, isn't to be feared. It's the sort of instructional role she was perhaps best known for.

Marcella Hazan died in September at age 89. She had a remarkable life story, retold quite nicely by both Kim Severson for the New York Times and Bonnie S. Benwick for the Washington Post, but was best known for her cookbooks like her 1973 work, The Classic Italian Cook Book, which are regarded as instrumental in introducing American cooks to traditional Italian techniques. 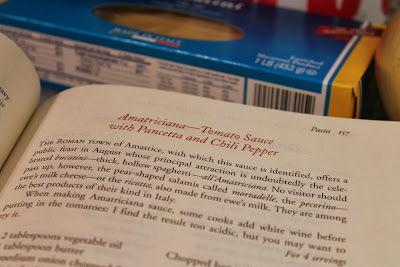 Having made several of her recipes now, I'm most struck by her judicious use of liquid for concentrating flavor. A lot of pasta sauce recipes will have you sauté the vegetables, add broth and cover to simmer. Not Ms. Hazan. She makes a point of not covering sauces so that as the water evaporates, the flavors are concentrated. It makes a lot of sense. Her recipe for bolognese sauce I made earlier this year is shockingly dried but bursting with flavor. The pasta e fagioli soup has so little broth, it's really more like stew. Both dishes were absolutely delicious and I'd make them again in an instant. Well, not exactly an instant, as they both take some time to prepare, which is another key piece of wisdom from the Hazan kitchen: don't rush things.


Tonight, food writer Cathy Barrow of Mrs. Wheelbarrow's Kitchen is hosting a virtual dinner party to honor Marcella Hazan's memory. She is encouraging anyone who wants to participate to share their work through social media with the hashtag "#dinnerwithMarcella." I have other plans tonight, but I wanted to offer this recipe as my contribution to Cathy's inspired effort to help make sure that Ms. Hazan's memory lives on through the delicious legacy she's left us. There's definitely going to be some great smelling kitchens this evening.


This amatriciana typifies a lot of what I've seen of her dishes. It's relatively simple. Just a few ingredients. Few embellishments: no herbs, garlic or extra spices. But the flavor was of this sauce was amazing. One of the most satisfying bowls of pasta I've made this year. I changed only a few things. Since I really like the technique, I boiled my pasta 2 minutes short of al dente and finished cooking it in the pasta sauce. Because of the space needs of this technique, I cooked the sauce in a Dutch oven rather than the saucepan Hazan called for (Hazan liked to cook a lot of things in saucepans, a habit that Severson recounts made for an amusing argument between her and Mario Batali). I also reserved a bit of the tomatoes' sauce to thin out the sauce in case it got a little too dry (I added about 1/4 cup, so not too much, but I think it helped).

1. Heat oil and butter in a Dutch oven over medium heat. Add onion and sauté until softened and the onion turns a pale shade of gold. Add pancetta and cook for about a minute, stirring a couple times. Add tomatoes, chili pepper flakes and salt. Reduce heat and cook uncovered at a gentle simmer for 25 minutes, adding additional reserved tomato juice if needed (I added about 1/4 cup). Taste and adjust salt and chili pepper as needed.

2. While the sauce cooks, bring a large pot of salted water to boil. Cook according to package directions for al dente, stopping 2 minutes short. Drain pasta and add to the Dutch oven with the sauce. Stir to coat pasta evenly and cook its final 2 minutes in the sauce. Turn off the heat, add the cheeses and stir to combine. Serve in shallow bowls. 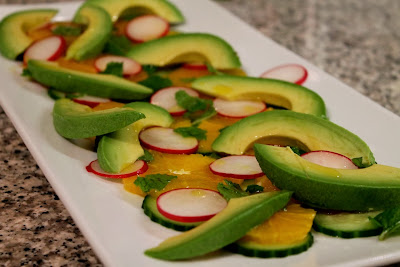 I served this simple salad with the pasta. As suggested by Eat Drink Garden, I added avocado.

Slice the cucumber into thin discs a arrange on a platter. Peel the orange and cut off any pith, then slice the orange into thin rounds and arrange on top of the cucumber. Top with slices of radish, avocado wedges and torn mint leaves. Sprinkle with salt, drizzle with olive oil and squirt with fresh lemon juice.
Posted by Cook In / Dine Out at 3:00 AM