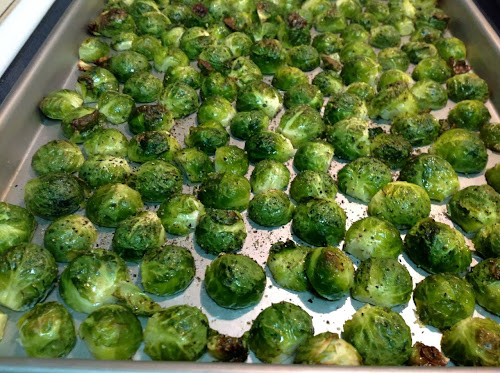 Wired: “25 Amazing Food Infographics, Drawn From 49,733 Recipes,” by Cliff Kuang.
Data geeks, food lovers and especially food-loving data geeks like me will enjoy this wonderful set of infographics developed from a “scrape” of the data on the tens of thousands of recipes available from the Food Network website. The graphics themselves are beautifully designed and include many great nuggets: most recipes for similar dishes are better liked if they include bacon (except pastas), Chef Jeff Mauro’s recipes are rated the best and Chef Alton Brown is pretty consistently good at everything. Best of all is the giant graphic plotting all the recipes that shows number of reviews, rating and number of ingredients, labeled with cool highlights like the “most reviled recipe” (Pastel Puertorriqueño, a dish that contains ham, raisins, olives and bananas) and the highest rated (Turkey with Herbes de Provence and Citrus)

CNN Eatocracy: “Build me up, peanut butter cup,” by Sarah LeTrent.
I got excited when I read this recipe article. Really excited. Basically, this tells you how to make peanut butter cups at home, which is an incredibly good idea. I love peanut butter cups. They are my favorite candy, and I don’t eat a lot of candy. They’re also kind of a mystery, so reading about how they work was a real treat. Making and eating them will be an even better treat though. Can’t wait to try this.
New York Times: “What’s for Dinner: Anchovies Elevate a Pan-Seared Chicken Dish,” by Melissa Clark.
Clark had a piece recently praising anchovies that I neglected to include in The Feed. She revisits the flavorful little fishes this week as a booster in a recipe for simple pan-seared chicken thighs, along with capers, garlic and lemon (sounds good, doesn't it?). Clark recommends serving this with a crusty bread to soak up the sauce. With some simply dressed greens you’d have a perfect weekday dinner. The accompanying video is really great too. Clark is a natural on camera; she looks like she’s really enjoying the chicken, and it made me really hungry watching her cook it.

Washington Post: “The Veg-O-Matic: It slices and dices as well as it ever did, which means not well at all,” by David Hagedorn.
Hagedorn’s review of the new but apparently not improved Veg-O-Matic is hilarious. He includes a nice dose of ‘70s nostalgia recounting how he used to recite the device’s TV ads as a child. Apparently its promises to easily dice and chop are overstated though, as he made a mess of quite a few vegetables. At least he got a nice fall soup out of it, although I can’t say I’m surprised the recipe doesn’t mention dicing by Veg-O-Matic. I’m reading Bee Wilson’s Consider the Fork right now, a history of kitchen equipment. I’m guessing this device won’t warrant a mention.

NPR: “How A Portland Cook Became A 'Proud Copycat' Of Thai Food,” by Joel Rose.
It’s no secret that Portland’s restaurant scene is red hot these days. And there’s no chef from my Pacific Northwest birthplace hotter than Andy Ricker, whose restaurant Pok Pok and its spin offs in Portland and New York have heralded a new generation of Thai cooking in America. Rose nicely summarizes Ricker’s life story and rise to prominence, including a great quote from the former Oregonian food critic about the food at Pok Pok (“It marched into your mouth like sour bombs, and fire, and like more funk than a James Brown record”).

Wall Street Journal: “Slow Food Fast: Four-Cheese Polenta with Chanterelle Ragout,” by Kitty Greenwald.
Speaking of cool Portland chefs, this week's Slow Food Fast recipe in the Journal is from Chef Cathy Whims of Nostrana. Her polenta with chanterelle mushrooms sounds really delicious, probably because it's made with so much cheese she says its almost a cross with fondue.

CNN Eatocracy: “5 foods you should eat this fall,” by Keri Gans.
Eatocracy has compiled a nice list of tasty seasonal vegetables and ways to really enjoy them (like roasted Brussels sprouts and poached pears). An accompanying gallery includes photos of 15 fall superfoods.
Posted by Cook In / Dine Out at 12:00 AM