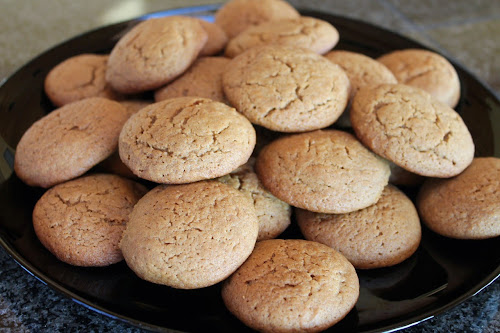 For these gingersnaps I was after something pretty specific: I wanted a cookie that was more crunchy than chewy and had good but not overpowering ginger flavor. I researched ingredients for a number of recipes. What I ended up with was closest to Smitten Kitchen's gingersnaps recipe.

First time I made this, they came out chewier than I wanted. Less cooking time will result in a chewier cookie. The second time I tried the recipe, I flattened the dough balls so they cooked up thinner, in addition to cooking them a bit longer, which resulted in the crunchy gingersnap I wanted.

Gingersnaps
Adapted from a recipe by Smitten Kitchen.

1. In a medium bowl, whisk together flour, baking soda, salt, ginger and cinnamon.

2. Add butter, sugar and brown sugar to a bowl of a stand mixer (or mix in a large bowl with a hand mixer). Beat until fluffy, about 3 minutes on medium speed. Add egg and molasses and beat until combined. Add dry ingredients and stir with a wooden spoon until just combined. Form dough into a large ball, wrap with plastic wrap and chill for at least 2 hours, up to 1 day.

4. Roll dough into 1-inch balls, place on baking sheets about 2 inches apart and flatten slightly. Bake for 13 to 16 minutes until desired doneness (less baking time for chewier cookies; more for crunchy ones). Cool on baking sheets for 5 minutes then transfer to a rack to cool completely. Store in the fridge.