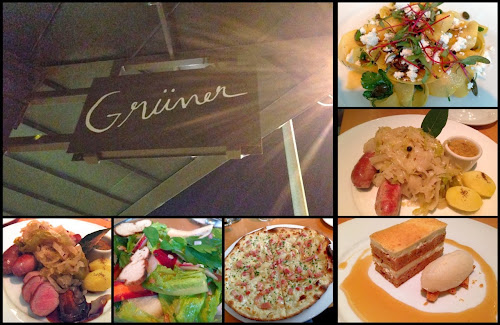 Enduring restaurant talent is a remarkable thing, something I got to enjoy recently at Grüner, where Chef Christopher Israel has found the latest outlet for his amazing cooking.

Although you may have read my restaurant reviews on Cook In / Dine Out, only a select few of you may have read the reviews I wrote 20 years ago as the restaurant critic for my high school newspaper (cushy post, but as I was editor-in-chief, I had an in with the boss). The most memorable restaurant I wrote about at that time was Zefiro, a standout in the trendy dining scene that sprouted up around Portland's 21st and 23rd Avenues in the early '90s.

As overseen by Israel, Zefiro was, at the time, exotic and revolutionary for its eclectic international tastes and simple, fresh ingredients. Certainly as a young person who, up to that, had not been a very adventurous eater, it was a revelation. I can still remember what I ate and loved when I visited: grilled chicken skewers with an Algerian spice marinade and Turkish coffee ice cream with cookies. It was so good! (Here's a nice look back from Eater PDX).

Whereas Zefiro drew its inspiration from the countries that ringed the Mediterranean Sea, Grüner heads north a bit into Europe's Alpine region, blending flavors from southern Germany, northern Italy, France and others with a foundation of locally sourced Pacific Northwest ingredients.


We began the evening with cocktails. I enjoyed the Hangman's Nüsse, a potent bourbon cocktail flavored with the Italian aperitivo Cocchi Americano and walnut liqueur. As good as it was, I was more impressed with Chris's Roots of Auvergne, a gin cocktail with Salers, a liqueur made from the root of the Gentian plant that grows in the French region of Auvergne (hence the name). With white vermouth and lemon verbena balm, the drink had a wonderful vegetal quality.


Among our starters, the shaved delicata squash salad was the most beautiful, with the yellow-orange squash shaved into pasta-like ribbons and topped with ricotta salata, pumpkin seeds, a mix of herbs and a dressing of cider vinegar and pumpkin seed oil. Our favorite was the tarte flambée, a sort of flatbread pizza with wonderfully meaty bacon and sweet onions. In contrast, the "Grüner" salad seems a rather tame mix of fresh garden vegetables, but I loved its heavy dose of red wine vinegar. I should also note the delicious bread basket that came out about this time, featuring a pretzel roll and whole grain bread, both of which were great.


For our entrees, we turned our attention to pork big time. Hard to say what was my favorite here, although probably the house-made bratwurst sausages my mom had (yes, my mom was with us, which was great fun), which were served with (also house-made) sweet and sharp grain mustard, sauerkraut with pickled peppercorns and yukon gold potatoes. Chris's choucroute garnie plate, which featured a mix of meats (including the bratwurst),  included a sweet-glazed piece of melt-in-your-mouth pork belly. I enjoyed a refreshingly not overcooked pork chop with red cabbage, herbed spätzle (which is like pasta if you've never had it) and wild plum preserves. My Bavarian mixed grill also included a weisswurst sausage, which was the only thing that didn't wow me, since it's comparatively bland next to the other more flavorful meats we enjoyed.


We concluded our dinner with a slice of hazelnut and brown butter cake with goat cheese accompanied by a pear sorbet quenelle, bits of hazelnut brittle and a swirl of caramel. The tasty treat was just as satisfying as the dinner that preceded it.


My lunch at Zefiro as a teenager was one of my earliest memories of enjoying a really good meal at a time when I was learning to care about good, quality food. Fast forward about 20 years and Chef Israel wowed me again, proving himself a master at manipulating cuisines of various provenance into a unified, delicious meal. The dinner was one of the best restaurant outings we've enjoyed in months.