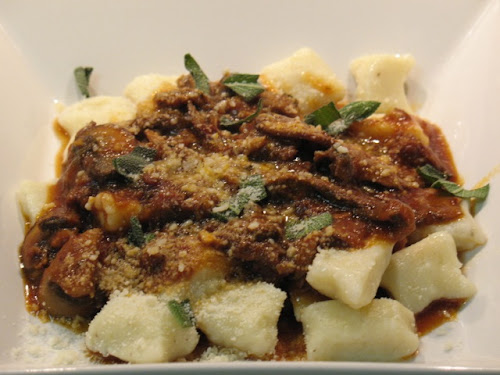 In a pinch, you can make a decent dish with store-bought gnocchi, such as what Whole Foods sells. But making it yourself is so much more satisfying. 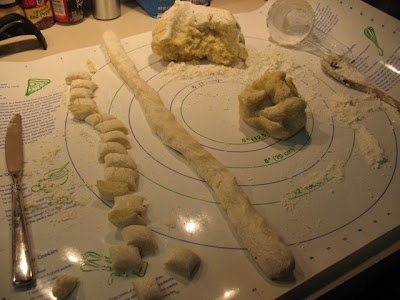 Gnocchi that are not well made (and that includes most store varieties) can be dense, weighty things. The gnocchi in this dish are as soft as the little pillows they resemble. That doesn't make them any less filling. A half a bowl of gnocchi is akin to a full bowl of pasta. 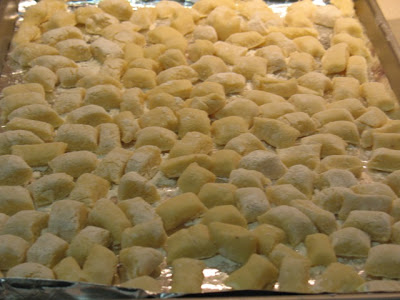 For this dish, I wanted a rich, meaty sauce with silky smooth texture. I turned to a Bon Appétit recipe for inspiration, although I made some key changes, like omitting a lot of the extra fat (the recipe calls for a full cup of fat, which is really unnecessary given that you can take advantage of the rendered fat from the meat to cook the vegetables). 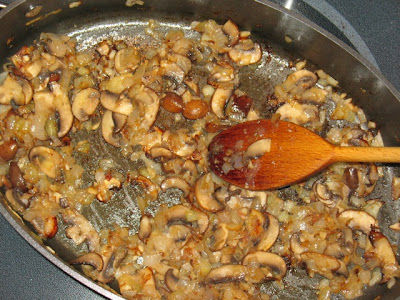 Even having cut that and the cream from the gnocchi dough (cream, really?), it's still a pretty rich dish. I also changed the meat mixture from ground chuck, pancetta and prosciutto to sausage and pancetta, reducing its meat content from about 2.5 lbs. to less than a pound (11 oz. to be precise). Since I wanted a focus on meaty flavors, I omitted the diced tomatoes and added extra mushrooms (I chose cremini) for their color and flavor. 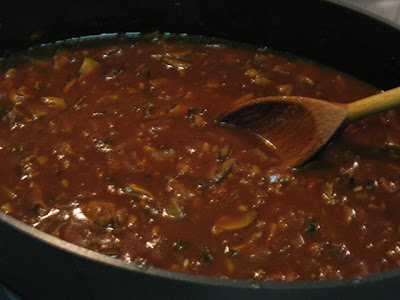 As we're in that still-winter-waiting-for-spring period, I balanced this hearty, wintery dish with a salad that nods toward spring: arugula and broiled asparagus with a shallot-lemon dressing (similar recipe here). 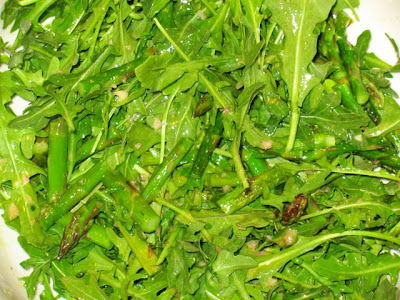 1. Heat a large, deep skillet or a dutch oven medium heat. Add the sausage, breaking up as it starts to brown. After a couple minutes, add the pancetta, continue cooking until the sausage is brown and the pancetta has started to crisp (about 5 minutes). Remove meat from pan.

2. Add onion to pan and saute over medium heat. After a couple minutes, add the garlic and then the cremini mushrooms. Continue sautéing mixture until the liquid the mushrooms have given up evaporates and they and the onions have browned, about 15 minutes.

3. Add the dried mushrooms, sage and 1 cup of the beef broth. Reduce heat to medium-low and simmer until the stock has been absorbed (about 4 minutes). Add a second cup of beef broth and continue simmering until absorbed (another 4-5 minutes). Add the remaining two cups of broth and the tomato paste and simmer until reduced, adding another 2 cups of water (1 cup at a time) or more if needed, letting the sauce simmer about 30 minutes total. Sauce should be thick and velvety.

4. Prepare a pan to steam the potatoes (I use a 4-quart saucepan with a steamer insert filled with water just below the base of the steamer). Steam the potatoes about minutes until soft. Set aside to cool slightly and then mash with a potato ricer into a large bowl. Once cooled, combine with the egg, salt and nutmeg. Then add most of the flour, reserving about 1/4 cup for the work surface. Combine with a spoon or your hands until the dough comes together, careful not to overmix.

5. Transfer the dough to a floured surface and divide into 8 parts. With your hands, roll each piece of dough against the floured surface to form long ropes about 3/4-inch thick. Slice ropes into pieces about 1/2-inch thick. If desired, roll the dough around the back of a fork to make ridges on the gnocchi. Place the formed gnocchi on a baking sheet dusted with flour.

6. Bring a large pot of water to boil. Cook the gnocchi in batches, about 1/3 at a time, boiling them for about 5 minutes. Use a slotted spoon to transfer them to a baking sheet sprayed with olive oil until ready to serve.

7. Serve the gnocchi in a bowl with a couple big spoonfuls of ragu topped with parmesan a sprinkle of fresh sage.
Posted by Cook In / Dine Out at 7:56 AM