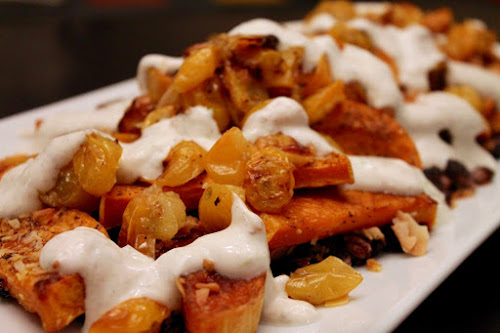 It's easy to load a Thanksgiving table with carb-heavy dishes like stuffing, mashed potatoes and biscuits. I'm not at all opposed to that, however, I like to balance my table with a few vegetable sides as well. This recipe, which was recently featured in the Washington Post, strikes me as being perfect as a healthy Thanksgiving side. More importantly, it's quite delicious. I've made it twice--loved it both times. There's very little added fat and no added sugar in this dish of primarily roasted squash and cherry tomatoes (good cherry tomatoes are mostly out of season, although I have still seen some recently--if not available, you could just omit them and still have a great dish, or perhaps substitute something like chickpeas). I love the black beans, which take on a slightly crispy texture from being cooked in a dry pan until they crack open. The recipe comes from Anna Jones' A Modern Way to Cook: 150+ Vegetarian Recipes for Quick, Flavor-Packed Meals. Based on this recipe, I'm more than a little intrigued about what other delicious ideas she has. 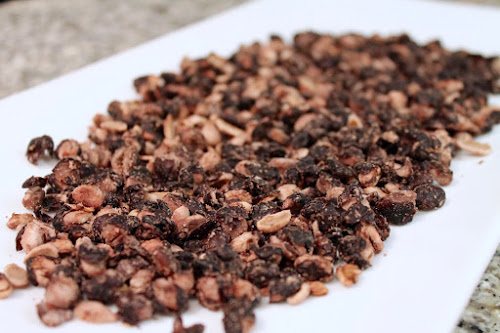 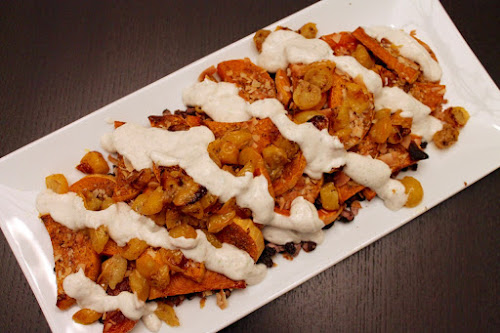 Adapted from A Modern Way to Cook: 150+ Vegetarian Recipes for Quick, Flavor-Packed Meals by Anna Jones, as appeared recently in The Washington Post

Note on deviations from original recipe: I peeled the squash, as I prefer it that way. I added the olive oil spray. The recipe gave the option of using liquefied coconut oil instead of olive oil. The recipe called for freshly ground seeds from 2 green cardamom pods, whereas I just used already ground cardamom. The recipe gave the option of using coconut yogurt instead of plain. Also, I used more yogurt--an entire single-serving container.

1. Position oven racks in the upper and lower thirds of the oven and preheat to 475 F.

2. Line two baking sheets with aluminum foil and spray with olive oil spray. Cut off the ends of the squash, then cut it half lengthwise. Scoop out and discard the seeds (I recently discovered that an ice cream scoop is the perfect tool for this). Cut the squash halves into 1/2-inch-thick slices and arrange them on the two prepared baking sheets. Drizzle the squash slices with 2 tbsp. of olive oil and sprinkle lightly with salt, pepper and 1 tsp. of ground cardamom. Roast the squash for 25 to 35, minutes until blistered and golden, rotating the baking sheets top to bottom and front to back after the first 15 minutes. Spread the toasted coconut over the squash and return the baking sheets to the oven for an additional 5 minutes or so until the coconut is lightly toasted. Remove from oven and set aside. If you only have one oven, keep it on for step 3 (if you have two ovens, you can do step 3 concurrently with step 2).

3. In a medium bowl, add the cut cherry tomatoes with remaining tablespoon of olive oil, salt and pepper, to taste, and grated ginger and toss to coat the tomatoes. Spread the cherry tomatoes onto another baking sheet (lined with aluminum foil for easy cleanup) and arrange them all cut-side up. Roast in the oven for about 20 minutes until the tomatoes look a bit deflated. Remove from oven.

4. While the vegetables roast, dry the drained/rinsed black beans on paper towels. Heat a nonstick skillet or saucepan (I used a shallow 3 1/2 qt. saucepan) over medium heat. Add the beans and cook for about 12-15 minutes, stirring occasionally until the beans have dried out, cracked open and crisped.

5. In a small bowl, add the yogurt, lime zest, lime juice, remaining tsp. of cardamom and salt and pepper to taste and stir to combine.

6. Serve the salad on a platter as follows: spread the beans first in a single layer, top with roasted squash slices, then the tomatoes and drizzle the yogurt on top.