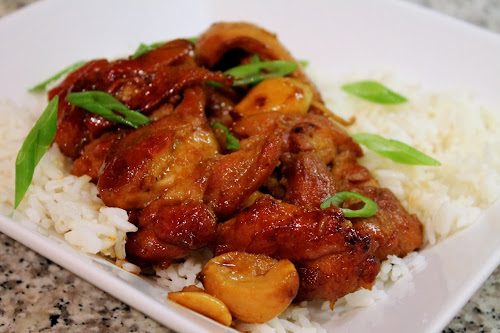 This recipe, from the latest issue of Bon Appétit, is how I discovered the amazing rice I wrote about yesterday. This dish is also very good: like the best homemade version of General Tso's Chicken you've ever had. Except not deep-fried.

Although not in the original recipe, I recommend spiking it a bit with a pinch of red chili pepper flakes if you want a little heat.

1. Heat oil in a large pot (such as an enamel-coated Dutch oven) over medium-high heat. Pat chicken pieces dry with a paper towel, season with salt and, working in two batches, cook in the oil until golden brown and crisp, about 6 to 8 minutes per side. Transfer partially cooked chicken to a plate (it will finish cooking later).

2. Add garlic to pot and cook, stirring frequently, until golden, less than 2 minutes. Transfer to the plate with the chicken. Remove excess fat from the pat.

3. Add 1/2 cup water to pot and use a wooden spoon to scrape browned bits from the bottom of the pot. Add brown sugar and stir to dissolve. Cook mixture, stirring frequently, until it thickens and turns a deep amber color (Bon Appétit's recipe said this would take about 4 minutes, but it took me a lot longer--like 10 to 15. I recommend watching it carefully, since it could burn easily once it thickens).

4. Stir in the vinegar (it may sputter a bit) and continue stirring to dissolve any sugar the vinegar may re-crystallize. If using red chili pepper flakes, add those now. Stir in the ginger, broth and soy sauce.

5. Return chicken to the pot, increase heat to bring mixture to a boil, then reduce heat and simmer gently until the chicken is fully cooked, about 20 minutes. Transfer chicken to a plate.

6. Bring cooking liquid to a boil and cook until thickened, about 10 minutes. Return chicken to pot and stir to coat with the sauce. Serve chicken over cooked rice and topped with fresh chopped scallions.
Posted by Cook In / Dine Out at 12:00 AM