Pigging Out on Bacon 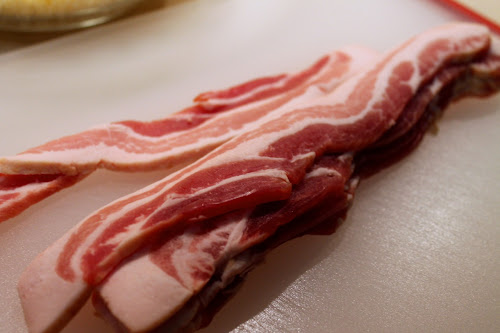 My March classic cooking theme takes a different tact this week as I focus on recipes with a common key ingredient, that most classic of meats: bacon. I’ll be focusing on a variety dishes that use the meat in different ways, including a wonderful bean stew, risotto, pasta, soup, salad and yes, cocktails.

Bacon is basically the most amazing meat—smoky and salty with a texture that’s the perfect intersection of chewy and crispy. Although always welcome at breakfast and in sandwiches, bacon’s versatility has allowed it to find a home in every meal from dishes that satisfy with downhome simplicity to those with a great degree of culinary creativity. Recently, bacon has wormed its way into dessert, even cocktails.

Chefs are in love with it too: I see it on menus from all sorts of restaurants. Chef Josh Valentine, one of the more memorable contestants on this year’s Top Chef, was particularly known for using bacon (with results that always made me really hungry).

So loved is bacon that substitutes from soy and turkey have been created for non-meat or pork eaters. Valiant though this may be, fake bacon doesn’t hold a candle to the real thing. I’ve heard of vegetarians that, perhaps secretly, indulge in bacon as their one guilty meat pleasure. I’m not going to debate the ethics of that, although given my own love for bacon, I can sympathize. “No one but a vegan can get excited about fake bacon,” says Michael Pollan in the new issue of Lucky Peach (although he’s arguing that for environmental and societal reasons we need better meat substitutes--If they come along, I'll keep an open mind).

When I say “bacon” I’m referring specifically to the American form, which is typically cut from pork belly in strips about an inch wide, a foot long and 1/8 to ¼-inch thick with even streaks of red (meaty) and white (fatty) parts (foreigners thus call it “streaky” bacon). Fattier bacon, that is bacon with more white than red, will cook up crispier, and meatier, leaner bacon is chewier, but I think a happy medium is best.

If you can’t wait to see what bacon dishes I’ll feature this week (or just want more ideas) here are some of the best dishes I’ve made in the past with bacon:

Email ThisBlogThis!Share to TwitterShare to FacebookShare to Pinterest
Labels: Classics