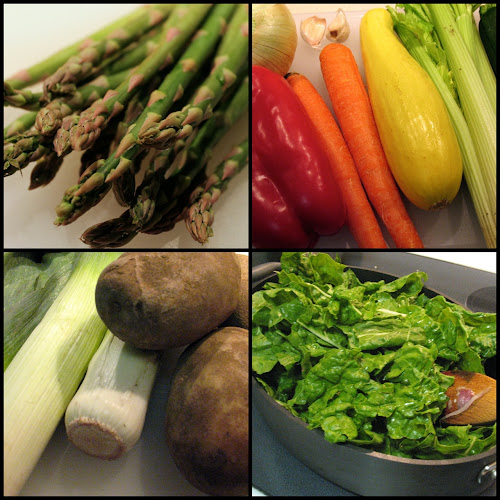 I'm not a vegetarian, but I know quite a few, even a few vegans. I won't give up meat because I like it too much, but I understand and respect the reasons that others have.

Meat-eating comes with a host of issues:


I think a lot of meat eaters purposefully shroud themselves in ignorance to avoid thinking about these things. They do so at their folly.

While I haven't eliminated meat from my diet, the aforementioned concerns have led me to make changes in the last 10 years. Beef is something I make rarely, rather than regularly (my blog was 8 months old before I posted its first beef recipe). We only buy naturally raised poultry--the kind that has normal proportions rather than those bred and fed to have breasts so unnaturally large it's hard to imagine the animals were ever able to walk. We don't buy meat raised with hormones or antibiotics. Yes, these decisions mean that our meat costs more, a choice not everyone can afford to make. However, if economics meant I had to choose between questionably raised meat or switching to more vegetables, I'd take the latter. As society becomes more aware of the problems with how we're raising meat, I hope affordable alternatives become more common.

Because my "classics" month was rather meat-heavy, this week I'm going vegetarian, something the Washington Post Food section did recently in honor of its editor Joe Yonan who "came out" as vegetarian, a bold step for such a high-profile food professional. The Post actually features rather prominently this week, having advised me on the recipe for Pasta Primavera with Asparagus Pesto and it's the source for the Multi-Grain Risotto with Broccolini and Brussels Sprouts recipe (which they got from Mintwood Place, one of my favorite D.C. restaurants). I'm also going to offer a Shaved Asparagus Salad and a refreshing cocktail that I think would go well with any of these dishes.

April through September is a good time to up the percentage of your diet made up of fresh fruits and vegetables. This is when local fresh vegetables become plentiful at farmers markets, and even at conventional grocery stores you'll find fewer foreign lands on the little produce origin stickers. Asparagus is out now, signaling the start of spring. Peas, green onions, green garlic and berries will be on their way soon. Then comes summer with its glorious bounty and my absolute favorite: ripe tomatoes. Nothing beats them. I'm getting excited just thinking about it.
Posted by Cook In / Dine Out at 12:00 AM

Email ThisBlogThis!Share to TwitterShare to FacebookShare to Pinterest
Labels: vegetarian