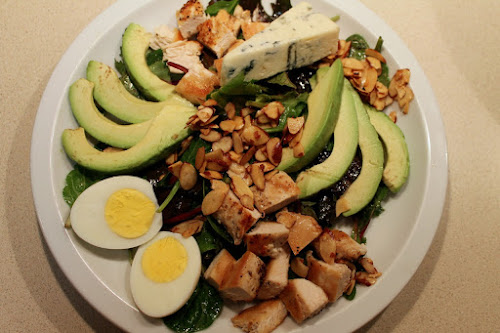 According to The Kitchen Project, the Cobb Salad was invented in 1937 at the Brown Derby restaurant in Hollywood by its owner Bob Cobb who, prowling for a snack, created a salad with what was on hand: lettuce, watercress, cold chicken, bacon, tomatoes, avocado, hard-boiled egg, cheese, chives and French dressing. It became very popular at the restaurant and has since become one of the most popular salads at restaurants everywhere.

Perhaps owing to its long and somewhat buffet-like list of ingredients, it's a salad that easily open to interpretation--for better or worse. Because there are so many ingredients, it can become a dumping ground for lesser quality ones under the guise that such flaws will be "masked" by everything else. However, I think a salad made with a lot of bad ingredients does not make a good salad. Too many times I've had Cobb salad with bland lettuce, not enough vegetables and too many flavors competing for attention without harmonizing. In my opinion, a good Cobb Salad needs the freshest quality ingredients and a little editing.

In that vein, there are a number of ingredients I could have included that do not appear here: tomatoes (not in season), olives, cucumber, onion and (gasp) bacon. Yes, I decided not to include the bacon. I do love bacon. After all, I just devoted a week of content to it. But I find it dominates the chicken too much in Cobb Salad. Instead, I've added my own twist: honey-smoked almonds. They provide a little crunch and smoke but with less assertiveness. 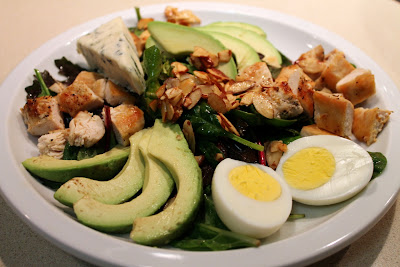 1. Heat 2 tbsp. olive oil in a medium frying pan over medium heat. Pat chicken dry with a paper towel and cook in the pan until cooked through and browned, about 10 minutes, turning halfway. Season with salt and pepper as they cook. Remove from pan, allow to cool a bit and cut into cubes about 1/2 to 3/4 inch wide.

2. Add mixed greens to a large bowl. Whisk together remaining 2 tbsp. olive oil with vinegar and salt and pepper to taste in a small bowl. Pour dressing over greens and toss to coat greens. 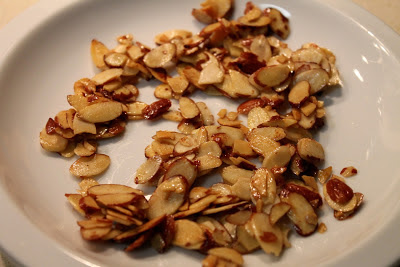 1. Combine smoke flavor, honey and water in a small bowl.

2. Toast almonds in a dry frying pan over medium-low heat until they start to turn lightly brown, about 5 minutes but watch closely to make sure they don't burn. Add the honey-smoke mixture and cook, stirring constantly, until the water has dissolved. Remove from pan and allow to cool on a plate (spread the nuts out evenly on the plate, otherwise as they cool the honey will bind them into nut clusters).