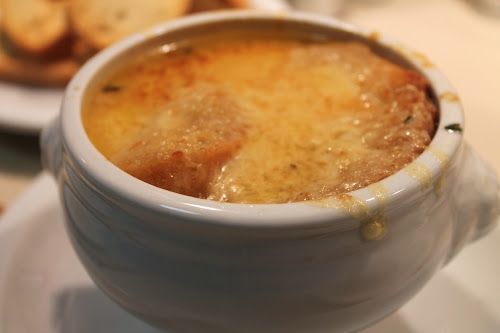 The Washington Post’s David Hagedorn had a great article last month extoling the virtues of dishes that prominently feature onions and cheese. How can you go wrong with that? That was the headline actually, but seriously, onions and cheese are one of those culinary couples that just work, always. Like Lucy and Ricky. Fred and Wilma. Laverene and Shirley. You get the picture. 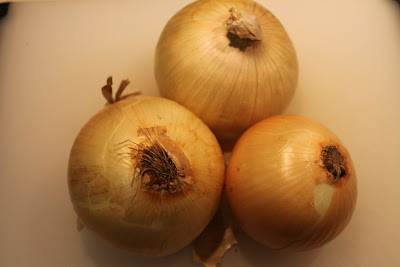 French onion soup is perhaps the most classic way to combine onions and cheese. And it sounds pretty simple: onions cooked in broth topped with toast, sprinkled with cheese and broiled. 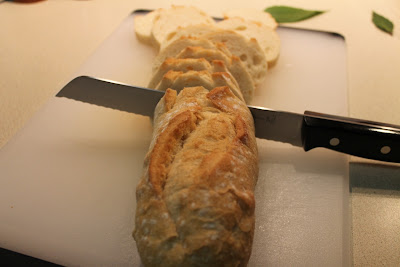 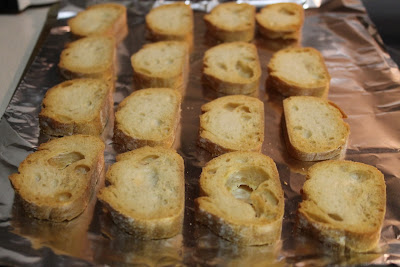 Hagedorn tinkered with the recipe to get it right, using a combination of yellow and sweet onions, since sweet onions alone were too sweet. He made the stock with the leftovers of smoked chicken, which sounds absolutely amazing, but unfortunately I didn’t have any smoked chickens on hand. Instead, I enhanced store-bought chicken broth with onions, celery, thyme and bay leaves and, here’s the kicker: bacon. Just like bacon flavored the broth for the Split Pea and Ham Soup, I thought it could also do wonders for French Onion Soup, and I wasn’t wrong. Its influence was subtle but noticeable. Smelling the broth, I could detect just a hint of smoky bacon goodness. 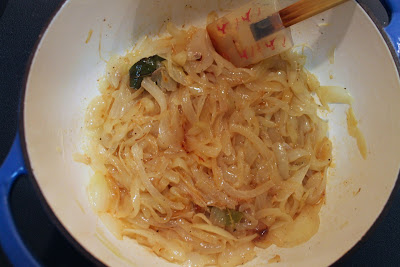 Otherwise, I followed Hagedorn’s recipe pretty closely. I deviated in one cooking instruction: he caramelized the onions in a large saute pan and then transferred them to a large pot. I did the caramelizing and simmering in the same pot, a dutch oven. I imagine his thinking was to do the caramelizing in a pan with more surface area so that it would go faster. Although using a dutch oven may take a little more time, I like the simplicity of using just one pot, and it helps ensure you don’t discard any wonderful onion flavor from the bits that stick to the bottom of the pan during the caramelizing. I also used only gruyere cheese instead of the mix of Gruyere and fontal in the original recipe.

1. Preheat oven to 375 F. Spread bread slices in a single layer on a baking sheet. Bake in the oven for about 20-25 minutes until dry and light brown. Set aside.

2. Heat a dutch oven over medium heat until hot. Add onions and 2 bay leaves to pot and spread evenly across the bottom. Cook undisturbed for a couple minutes, then drizzle the oil over the onions and add the butter but do not stir for a few minutes to let them start to color on the bottom. Then stir them, season to taste with salt and pepper, and continue cooking, stirring occasionally, until the onions are golden brown, about 30-35 minutes.

3. Add remaining bay leaves, broth and onion powder and bring to a boil. Reduce heat to medium and cook for about 15 minutes, maintaining a gentle boil. Stir in the fresh thyme leaves and port wine.

4. Adjust oven rack to upper third position and preheat broiler. Place oven-proof soup crocks on a rimmed baking sheet and ladle the soup into the bowls so they are filled to 1/2 inch below the bowl rims. Float two or three toasted baguette slices on top of the soup and top with a generous half cup of shredded gruyere cheese. Broil for about 3 to 4 minutes until the cheese is melted, bubbling and a little browned. Serve soup hot. 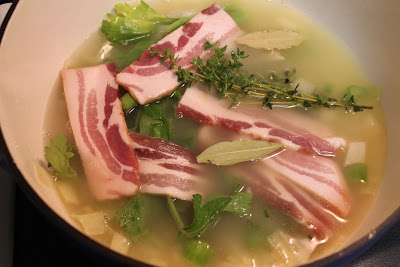 Heat oil in a dutch oven over medium heat. Add diced onion and celery, season with seasoned salt and sauté until softened and aromatic, about 5 minutes. Add retained celery leaves, thyme, peppercorns, bay leaves, bacon and chicken broth. Cover, increase heat to medium-high and bring to a boil. Reduce heat and simmer, covered, for 40 minutes. Set aside to cool, strain out solids and refrigerate stock until ready to use.
Posted by Cook In / Dine Out at 12:00 AM