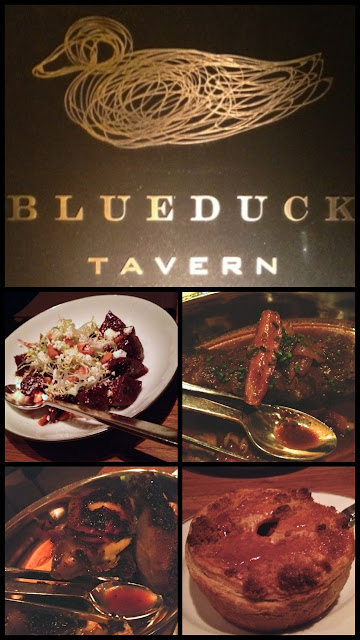 It took us a few tries to make it into Blue Duck Tavern, the handsome restaurant in the West End’s Park Hyatt hotel. We had reservations and then some friends we hadn’t seen for awhile wanted to hang out the same night. Of course we canceled, but it was another 6 weeks before I could get us in again at a reasonable hour on a Saturday night. This place is hot.

That may seem surprising for a hotel restaurant that’s hardly “new”—it’s been open since 2006, having taken over the Park Hyatt restaurant space from the former Melrose. But tables here are as in demand as they are in the city’s buzzinest new joints. By all counts, credit goes to Chef Sebastien Archambault for pushing the cuisine to its buzz-heavy level since he began helming the kitchen in December 2011.

The food was, appropriately, the star of our dinner. The braised beef rib was tender and bathed in a tangy house-made steak sauce. You’d be advised to squirrel away a couple pieces of the bread they bring early in the meal for sopping up this sauce. Roasted barbeque chicken was a delight. This isn’t barbecue joint chicken, but rather a bird brined in barbecue sauce ingredients and roasted to succulent perfection—its flesh a delightfully smooth texture underneath the flavorful, blistered skin. The barbecue flavor is subtly but not overpoweringly sweet. Like the ribs, it also comes with a special sauce made from collard greens and corn bread.

The list of potato, grain and vegetable sides includes a variety of enticing options. The thick hand-cut BDT triple fries I saw on some tables looked tempting, and the forbidden rice with cauliflower, dried fruits, candied ginger and cherry vinaigrette sounds intriguing. We opted for the Brussels sprouts, which had a good char on their cut sides and were served with bacon, pecans and dried cranberries that added a nice sweetness to the dish.

The starter selection includes soup of the day, salads, vegetable dishes, oysters, charcuterie and bone marrow. We opted for a warm leek salad served with generous chunks of guanciale and gribiche sauce, a hard-boiled egg dressing, and a beet salad with frisee and peanuts that had an unusually soft texture. “They’re fried,” confirmed our server, who took good care of us that night. With the exception of some initial confusion about where to go to be seated, the service worked well. Plate-clearing was efficient but never did they commit the sin of clearing Chris’s plate before I finished mine (I’m almost always the slower eater).

The setting fits the food perfectly. Low, warm lights, large glass windows, lots of natural wood and some old-fashioned wall quilts speak to the rustic but upscale American cooking coming from the kitchen. Speaking of which, the large open kitchen is perhaps the tavern’s most arresting visual element. It’s so open that a trip to the restroom means snaking through the pastry kitchen.

To finish, we had to have the apple pie, which Blue Duck Tavern considers its signature dish. It was quite good, although it wasn’t as spectacular as I’d hoped, ever the folly of great expectations. The generous portion, perfect for sharing, is architecturally structured with straight up-and-down sides and a fitted top like a little apple pie hut, which was clever looking but fell apart pretty easily. The apples had a good texture and were well spiced, but I thought the crust was surprisingly dry. Good thing we ordered it with a scoop of honey-vanilla ice cream, which was delicious. It’s a shame the pie didn’t perform as expected since pastry chef Peter Brett had his last day at Blue Duck Tavern yesterday, and now I won’t have a second chance to sample his work.

If I had one gripe about our dinner, it has to do with the food. Not the food itself, which as I said earlier was excellent, but how it was served. As is the trend, dishes at Blue Duck Tavern, very similar to the service at Range (in fact, there are a lot of similarities between the two restaurants). However, these dishes are so well composed and garnished with amazing sauces that I think they would be better served as individual portions. Throughout dinner I felt like I was dodging my wine and water glasses trying to get a little more sauce and more than once I knocked the serving tongs into said sauce. I’d love to see the kitchen do the plating instead of leaving it to me. I’m sure it would look even better that way.

With spring fast approaching, I’d be curious to go back soon and see how the menu changes with the seasons. That is, if I could get a reservation. Better book now for late April.