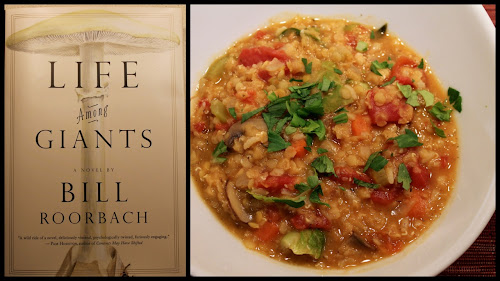 On its face, Bill Roorbach’s Life Among Giants looks like a mystery novel, but its depth of story and character is beyond that of typical genre fiction. Yes, the murder of teenage narrator David Hockmeyer’s parents sets the story in motion, but there’s more going on than David and his sister Kate’s decades-long quest to find out what precipitated their parents’ untimely demise.


It’s also a story about how curiosity with fame, greed and lust entangle the lives of a seemingly ordinary middle class family with those of the internationally famous ballet dancer and her rock star husband who live across the pond in the “High Side” compound. It’s a book with a loving embrace of a wide range of misfit characters—the unnaturally tall football jock with a knack for creative endeavors; his tennis pro sister haunted by mental illness; a gay, tattooed chef and his vivacious transgender lover. It’s about how time alone cannot shake certain demons; they must be confronted.


Food plays a key role in this thoroughly enjoyable novel.  David’s opening line, “I have a thing about last meals,” references, among other things, the meal his family enjoyed just before the fateful murder:

The perfect drinks, the perfect salads (down to perfect individual slices of radish, clearest memory, a bit of the red skin pulled into the white of the glistening core by the edge of a prep cook’s knife). And the perfect sandwiches, so neatly made on white toast, perfect, perfect, and served with perfect china-lavender ramekins of house-made mayonnaise, tiny spreading knives plated in gold. It was really, really good food, unforgettable down to the last details, details I’d linger over for the rest of my life. So simple: pommes frites, those BLTs, tiny cups of lobster bisque. “Sherry,” my mother said, tasting the soup, that palate of hers. And the dessert. I’ve never since had chocolate cake like that, a celebration in itself where no celebration was possible. 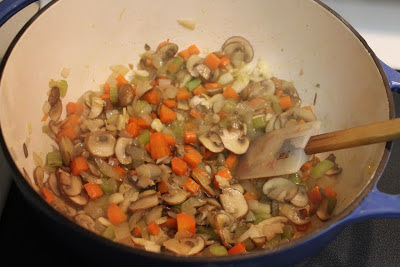 Although David is a high school senior at the time, he reflects on these events as an adult restaurateur with experience gained at the side of his chef-friend Etienne, working first in Miami and later at the restaurant they opened together in David’s childhood hometown. Their success spawns an empire devoted to culinary principles in keeping with what Michael Pollan espouses in The Omnivore’s Dilemma: “great fresh food beautifully grown and prepared, reasonable prices, not much meat.”


A dish that particularly stands out in the novel is a lentil stew David makes while his sister Kate recounts her latest ruminations on the long-unsolved case of their parents’ deaths (see pp. 165-171). David’s steps in making the stew are so precisely recounted that I suspected Roorbach has actually made this, which he confirmed over Twitter is something he eats all the time in the fall. I think it sounds delicious and have attempted to create a recipe for it based on the book’s description. To fill in a few blanks, I turned to this Indian Red Lentil Stew from Healthful Pursuit. 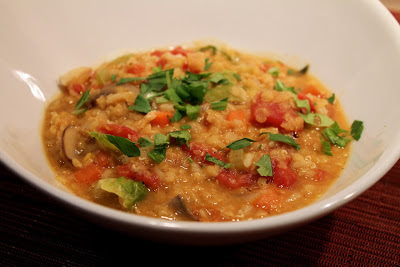 1. Soak lentils in salted water for about 10 minutes. Drain and set aside until ready to use.

2. In a small, dry frying pan, toast cumin seed and red pepper flakes over medium-low heat until fragrant. Grind in a spice grinder (I use a coffee grinder repurposed for this) and set aside until ready to use.

3. Heat olive oil over medium heat in an enamel-covered dutch oven, large deep-sided skillet or other large soup pot. Add onions and sauté until softened, about 5 minutes. Add carrots and celery and cook another 5 minutes. Add mushrooms and garlic, and cook about another 5 to 10 minutes until softened and the mushrooms start to brown. Add soaked lentils, ground spices, garlic, thyme, tomatoes, raisins, rice, bay leaf, bouquet garni and water. Season to taste with salt and fresh-ground black pepper. Bring mixture to a boil, cover, reduce heat and simmer for 15 minutes.

4. Uncover soup. Add vermouth and Brussels sprout leaves. Simmer for an additional 8-10 minutes. Taste, adjust seasoning and serve topped with chopped celery leaves.
Posted by Cook In / Dine Out at 12:00 AM