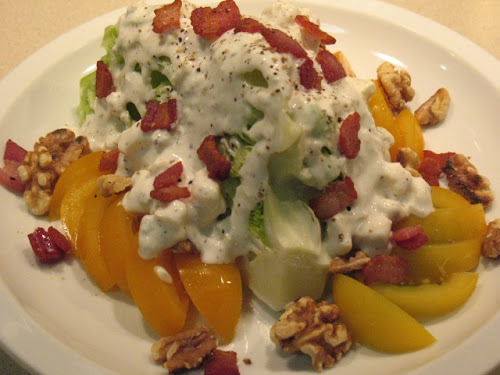 I ate a lot of iceberg lettuce as a child, but as an adult I rarely do. It's not just me: statistics show that iceberg lettuce consumption in the United States peaked in 1989, when the average person ate 29 pounds of it, down to just 17 pounds in 2010, although that still puts it ahead of leaf and romaine lettuce at 11 pounds per capita in 2010.

Iceberg's biggest selling point is that it is crispy, as it is decidedly lacking in flavor and nutritional value as compared to romaine or leaf lettuce (for example, romaine has 8 times more vitamin A, according to Whole Foods).

Still, iceberg has its place, and that place is the wedge salad. It's a salad classic that peaked in the 1960s, particularly in steakhouses. Now it's poised for a comeback. D.C.'s Buck's Fishing and Camping makes a really excellent one, and an episode this season of ABC's Modern Family featured a storyline around it. 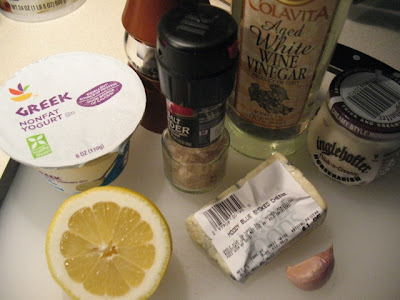 The secret to creamy, low-calorie dressing is substituting nonfat Greek yogurt for mayonnaise or sour cream. It has great texture and a pleasant tangy flavor. For something like this where the emphasis is on the cheese, it works like a charm. 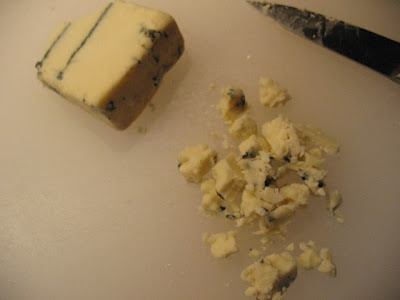 For more interesting flavor, I used a smoked blue cheese, but you could use nonsmoked or gorgonzola. Also, I love that Buck's dressing has horseradish sauce, so I added some too. Taste it before you add it. The kind I bought was really strong; other brands, particularly the creamy ones won't be. Adjust to taste for your preferred level of spice.

1. To make the dressing, crush the garlic clove to smash it and remove the skin. Cut off the root end. Put the smashed garlic in a medium bowl, sprinkle with salt and use a blunt object to grind it into a paste (I use the round end of a cocktail muddler; use a mortar and pestle if you have that).

3. Heat a medium nonstick frying pan over medium heat. Cook the bacon until crisp, drain and set aside.

4. Heat a small nonstick frying pan over medium-low heat. Toast the walnuts until fragrant and set aside.

5. Place the lettuce wedge on a plate. Arrange the tomato slices and toasted walnuts around it. Spoon 1/3 cup of dressing (half of the recipe) over the wedge and top with bacon crumbles.
Posted by Cook In / Dine Out at 4:30 PM