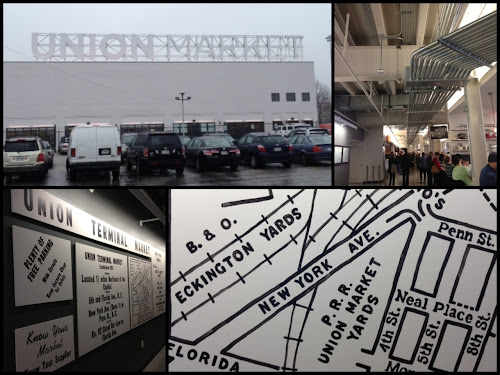 Public markets can be magical places for food lovers. As a kid, I used to enjoy visits to Yamhill Market in downtown Portland, Oregon, which had a mix of small food stores and vendors of other wares. Some of the country's best known markets are places like Pike Place Market in Seattle and Reading Terminal Market in Philadelphia (where I enjoyed a really great cheesesteak this week). They present a great mix of prepared food you can eat on site or take away and fresh ingredients you can take home to make amazing meals with.

Eastern Market has long been a popular public market in D.C., but since last year, it's had some competition to the north from Union Market, a similar concept of a large open space divided into stalls of prepared foods of all varieties, fresh food purveyors like butcher shops and vegetables stands and some nonfood sellers. Although it only opened in September, Union Market honors a history of public marketplaces in the area like Union Terminal Market and Centre Market (the Union Market site has an informative history). It's situated in an area of the city where there are many food wholesalers, just on the edge of NoMa, one of the city's hottest growing neighborhoods.

Union Market is a bit of a drive for us, but it was well worth the trip. Ever since I've been raving about the products I picked up there. Here's an overview of the sellers we visited: 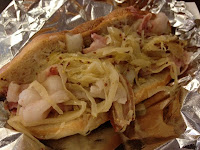 Red Apron Butchery. We started our Union Market experience with a quick lunch, since shopping the market hungry could be a big mistake. Eater DC recently included Red Apron on a list of 15 hot new sandwich places, specifically highlighting the Porkstrami, basically pastrami made with pork served with sauerkraut and mustard. We also had a roasted pork sandwich with peppers, which was even better.

Harvey's Market. This is the other butcher shop. From here, I picked up a couple pounds of sirloin steak for a beef dish I'll write about soon. The other thing I got was a pound of the most incredible bacon I've had--thick and meaty and so smoky that I thought something was on fire when I was browning it for a stew. It was really incredibly good.

Cordial. Don't dismiss Cordial because it's small. Rather than stock the typical labels you can get anywhere, they've made a thoughtful selection of bottles I don't see in other wine stores. I was excited to pick up a bottle of Brandborg 2009 Bench Lands Pinot Noir which is made in Elkton, Oregon, not too far from where my grandmother grew up. It was also profiled recently in the Washington Post.

Salt & Sundry. While most of the market's stalls sell food, Salt & Sundry sells other supplies, mostly dishes, but also a great collection of barware, including a nice selection of bitters and shrubs. This is where I picked up the Liber & Co. grapefruit shrub I wrote about yesterday, along with some Bittermens and Scrappy's products.