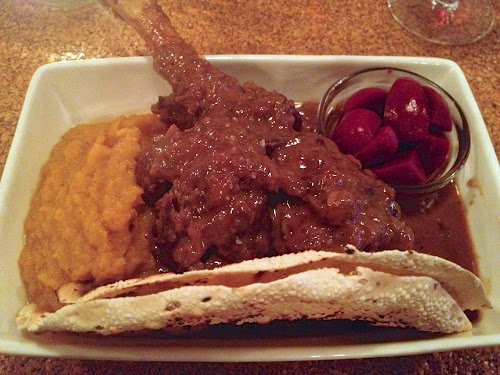 For a neighborhood with so many restaurants, for a long time Woodley Park felt like a culinary wasteland. Then things started to change. Open City has lines down the block for breakfast. Chipotle is a lunch hot spot. A reinvigorated New Heights is serving exciting dinners.

District Kitchen strikes me as the sort of place to play right to that demographic. It has that stripped-down exposed brick look that is very popular these days. It looks like a place for locals, not tourists, although hopefully all are welcome.

Our dinner was marked by a few high points, but generally the food was decent without being stellar. The one true standout was the Lamb Shank Vadouvan, an Indian-spiced braised lamb shank that was falling-off-the-bone tender with a sweet side of pumpkin puree, pickled beets and poppadom, a crisp Indian cracker-like bread. In contrast, the pork chop was fine and our starter salads (Waldorf and grilled braising greens) were fresh and tasty but offered nothing surprising. I felt similarly about the dessert selection (tiramisu, for example), but did enjoy the chocolate bread pudding with ginger-vanilla ice cream we ended up with.

Another thing that I really appreciated about District Kitchen was its wine program. You can tell right away that wine is treated with the respect and care it deserves. Temperature-controlled wine storage is visible from the main dining room. The nicely edited by-the-glass wine list allowed us to enjoy a tasty selection of reds served at the appropriate temperature (it was exactly the sort of treatment I wished The Library at the Public practiced).

Even if we weren't blown away by District Kitchen, we weren't dissatisfied by it either and would probably go back at some point. It's certainly a good sign that the restaurants of Woodley Park are increasingly places the neighbors might want to visit.