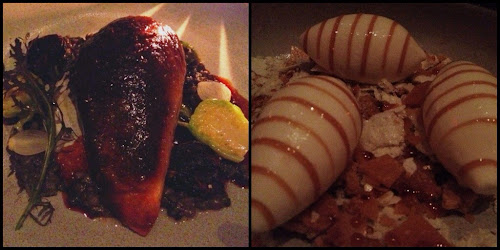 Ever since it opened, I've been dying to try The NoMad, the casual sister restaurant of Eleven Madison Park, one of the country's most acclaimed restaurants. Chef Daniel Humm won the James Beard award for best chef earlier this year and opened this restaurant in the NoMad Hotel to showcase simpler dishes inspired by the culinary mastery of his other restaurant.

The space is gorgeous: an intimate, pillar-lined dining room with a glass ceiling. In the back is a bar with carved elephants and beyond that a bookshelf-lined lounge lined. The rooms are dark but not too much so (I didn't have to strain to read the menu).

Cocktails are a good way to start the evening, and The NoMad has a generous list of traditional and creative offerings. The Pins and Needles, similar to a martini, features London dry and old tom gins as well as eau de vie of Douglas fir, a clear brandy flavored with the Oregon state tree. Given my Portland roots, it was cool to "drink" the tree I grew up with. The piney herbal taste hits you first while the chambery dry vermouth lingers. The Start Me Up cocktail features a favorite trifecta of honey, lemon and ginger mixed with rum and bourbon.

With dinner, you'd be hard pressed not to find a bottle to your liking on the extensive French-leaning wine list. We enjoyed a particularly excellent California pinot noir and a French cabernet franc that was pleasingly earthy but no so much so that it was "gamey" like some cab francs can be.

Starters were probably the best part of our meal. Roasted cauliflower comes with grapes, marcona almonds and cubes of cheddar, as well as a few thin slices of raw cauliflower and a welcome hit of acid (red wine vinegar, I think). It's an unusual but delicious combination. Roasted beets are even more intriguing, served on a bed of toasted rye bread crumbs and a generous dollop of smoked creme fraiche.

Roast Chicken for Two is the dish the restaurant is best known for. People all around us were ordering it, and I knew I had to try Humm's take on the simple classic, which he dresses up with an under-skin stuffing of foie gras, black truffles and brioche crumbs. Although I liked this dish a lot, it wasn't the best roasted chicken I've ever had, a pedestal still occupied by Frank Ruta's Palena Chicken. The chicken was flavorful but dare I say a tad dry. After reading Pete Wells' New York Times Diner's Journal story on the dish, I understand how the foie gras stuffing is used as a fat source for richness and browning the skin, but it's not something you can really taste. Likewise, I couldn't discern any black truffle flavor. These luxurious ingredients seem wasted if you can't taste them, like they're part of the dish more for dazzle than actual taste.

The service was prompt and efficient, almost to a fault. Our check arrived immediately after we'd finished the last bite of our dessert. But that's better that than the dreadful opposite where you're sitting around for ages waiting for someone to let you pay so you can move on with your life. Still, there were always a great number of servers in the room, which created constant activity and made the atmosphere feel a little less relaxed than I'd have liked.

We finished our evening with Milk and Honey, dollops of vanilla ice cream drizzled with honey and served with toffee brittle and a sweet flaky crumb that also tasted of honey. The well-balanced dessert was a good send off for a fine meal. I want to also mention the earthy flatbread that started the meal, which had gray-green color from being dyed with bamboo ash and comes with onion, sweet potato, sage and rosemary coating it. It's a prime example of how The NoMad, while serving homey dishes like roast chicken, still pushes the envelop with unusual ingredients.