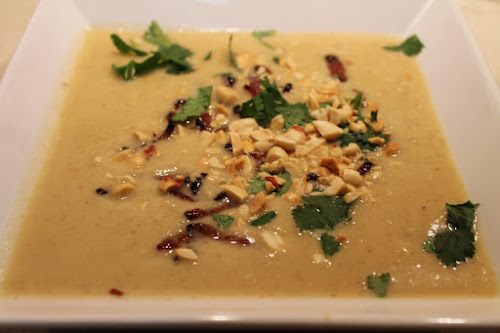 This dish came about somewhat unexpectedly. Recently, I’d planned to make a pretty straightforward pureed cauliflower soup for a weeknight dinner—something topped with bacon and chives—but then life intervened and I ended up going to happy hour that day instead of cooking.

Being a hardy vegetable, cauliflower keeps fine for quite awhile. So what would’ve been a weeknight dinner turned into a weekend dinner and along with it the extra time to turn ordinary cauliflower soup into something extraordinary. 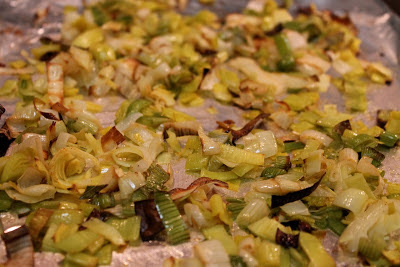 Off the bat, I knew one thing I could do with the extra time was roast the cauliflower. Searching the web for inspiration, I came across this recipe from Love & Lemons that has roasted leeks along with the cauliflower (for tips on cleaning leeks, watch this video by Melissa Clark of the New York Times). She also used some miso paste, which got me thinking about the possibility of pushing the flavor of my soup eastward.

Rather than make this Japanese, I headed to southeast Asia, inspired by the coconut, ginger and lime flavors of Tom Kha Gai soup, my favorite way to start dinner in Thai restaurants. Don’t be afraid of the fish sauce. Sure, it may smell a little rank in the bottle, but once it’s mixed into the broth it adds to the unmistakable flavor profile of Tom Kha Gai. You’d miss it if it wasn’t there. I topped this with chopped peanuts and cilantro for an additional Asian touch. Because I had it on hand, I also added bacon. Although I love bacon, I wasn’t completely sold on its inclusion here. Give it a try if you like or leave it out. 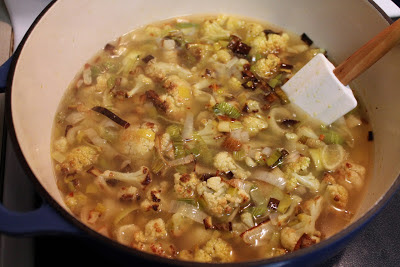 1. Preheat oven to 400 F. Toss the cauliflower with 2 tbsp. olive oil, sprinkle with salt, spread out in a single layer on a lined baking sheet and roast for 40-45 minutes until browned and tender, stirring every 15 minutes. Set aside until ready to use.

2. While cauliflower roasts, prep the leaks by cutting off the dark green part, slicing the leeks in half the long way (including through the root), cleaning then in the sink by running them under cold water while separating the layers to remove any grit and lastly slicing them into 1/4 to 1/2 inch half rounds. Toss with 1 tbsp. olive oil, sprinkle with salt and roast for about 30 minutes until tender and some pieces are browned. Set aside until ready to use.

4. (optional) While soup simmers, cook the bacon in a large frying pan over medium heat until crisp. Remove with a slotted spoon and transfer to a paper towel-lined plate.

5. Remove soup from heat. Puree soup using an immersion blender (or alternatively, transferring it in batches to a blender) until smooth. Taste and correct seasoning. Serve in bowls topped with peanuts, cilantro and, if desired, bacon.
Posted by Cook In / Dine Out at 12:00 AM