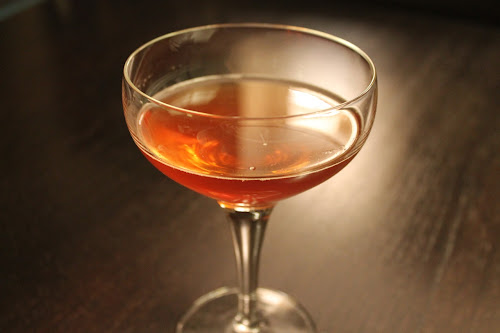 Steven Spielberg’s Lincoln is a historical biopic that seeks to illuminate its subject not by telling his life story but by focusing on one important event. In this case, that is President Abraham Lincoln’s advocacy of the 13th amendment to the Constitution to outlaw slavery as the Civil War draws to a close. Lincoln is the year’s most nominated film: 12 Oscar nods, including Picture, Actor (Daniel Day-Lewis), Supporting Actress (Sally Field) and Director.

I wanted the Lincoln cocktail to be simple and elegant, as well as symbolic of the war. There’s whiskey to represent the South and maple for the North, while the smoke evokes the guns of battle and the red bitters, the blood of the battlefield.

Combine ingredients in a shaker with ice. Shake until cold and strain into chilled coupe.

Like The Lincoln? Vote for it as your favorite on Facebook. View all nine Oscar Cocktails here.
Posted by Cook In / Dine Out at 12:00 AM