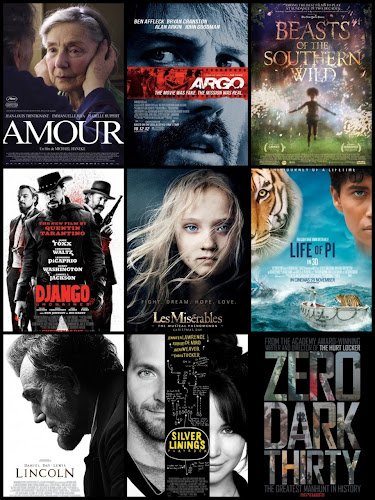 Last week, I mentioned that I’m not really into the Super Bowl. Football is just not my thing. Movies, on the other hand, are very much my thing, and every year since I was 15 I’ve followed the Oscars intently. This is my Super Bowl.

In the lead up to the February 24 Academy Awards ceremony, I will be featuring cocktails inspired by the nine films nominated this year for Best Picture.

This year’s slate is an amazingly diverse group of films, telling stories set in the U.S., Europe, the Middle East and the open sea, with points of view of main characters as young as 6 and as old as 86.

They tell stories of war, revenge, death, mental illness and catastrophe, but also love, family, endurance and humanity. You even get a dance contest, some old fashioned gunfights and a little Hollywood subterfuge.

As I post each cocktail, I’ll include a link on this page. So bookmark this page and check back every few days.

Just like the films, the drinks are a mix of styles and complexity. The most complicated ingredient requires a cream siphon, but I suggest an easy substitute. Otherwise, it’s mostly just shaking and a few custom syrups, which are easy and fun to make.

Amour A champagne cocktail the movie's couple could have enjoyed in better times.

Argo A whisky cocktail that draws on the film’s Canadian, Iranian and Hollywood elements.

Beasts of the Southern Wild A whiskey-based dessert cocktail as fanciful as the film that inspired it.

Django Unchained Like a mint julep but with a fiery kick, inspired by Taratino's typically bold style.

Les Misérables A gin martini made with Lillet Blanc and French liqueurs inspired by the musical’s story of triumph over adversity.

Life of Pi A play on the daiquiri inspired by the film’s vivid imagery.

Lincoln A simple, elegant whiskey cocktail that nods to the film's North vs. South conflict.

Zero Dark Thirty A layered shot inspired by the black and green colors of the film's climatic sequence as seen through night vision goggles.

(Bonus) Skyfall Inspired by the Vesper James Bond martini but made with scotch and Domaine de Canton for the film's settings in Scotland and China.

Vote for your favorite drink on Facebook. See tips for serving these drinks at your Oscar Party here.
Posted by Cook In / Dine Out at 12:01 AM