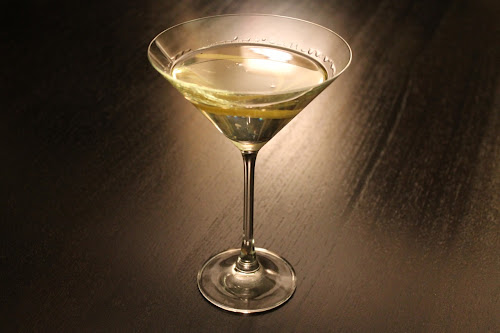 The musical Les Misérables tells the story of how peasant Jean Valjean, imprisoned for stealing bread, reinvents himself first as a businessman and then as father to Cosette, daughter of the tragic Fantine who dies after sinking into a life of prostitution--all while being relentlessly pursued by Police Inspector Javert. Tom Hooper’s epic film adaptation is a perfect match for the story’s bold music and multi-generational storytelling. It is nominated for 8 Academy Awards, including Picture, Actor (Hugh Jackman) and Supporting Actress (Anne Hathaway).

Cosette eventually finds love and a happy ending in Les Mis, a contrast to the brutal futility experienced by her mother and adoptive father early in the film. This contrast reminded me of gin: a spirit once blamed for all the social ills of England but, in modern times, achieves the pinnacle of cocktail elegance in the martini. Nodding to the film’s setting, the Les Misérables cocktail is a martini perfumed with the French aperitif Lillet Blanc and sweetened with the French liqueurs St. Germain and Domaine de Canton.

Combine liquid ingredients in a shaker with ice. Shake until cold and strain into a chilled martini glass. Garnish with lemon twist.

Like The Les Misérables? Vote for it as your favorite on Facebook. View all nine Oscar Cocktails here.
Posted by Cook In / Dine Out at 12:00 AM