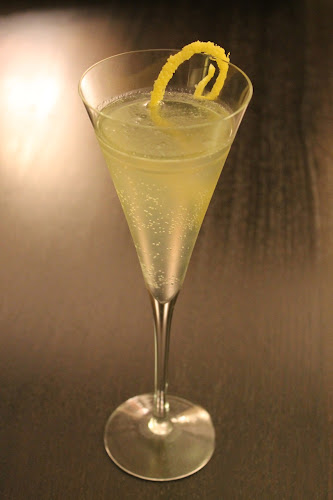 Amour tells the story of an elderly Parisian couple who face their mortality when the wife is struck ill and the husband must care for her to the bitter end. The heart-wrenching drama is a Best Picture nominee--only the ninth foreign-language film to earn that honor--and counts nods for its lead actress (Emmanuelle Riva) and director (Michael Haneke) among its five Academy Award nominations.

Although the film's heart-wrenching story is not fodder for cocktail inspiration, I thought about the main characters Georges and Anne, people of the arts who are shown attending a musical performance at the beginning of the movie. The Amour is a champagne cocktail not dissimilar from the classic French 75, something I imagine George and Anne could have enjoyed together in better times, perhaps during a performance intermission or maybe afterwards in an old-fashioned Parisian bar before heading home.

Combine gin, pear liqueur and lemon juice in a cocktail shaker with ice. Shake until cold. Strain into champagne flute. Top with champagne and garnish with lemon twist.

Like The Amour? Vote for it as your favorite on Facebook. View all nine Oscar Cocktails here.
Posted by Cook In / Dine Out at 12:00 AM