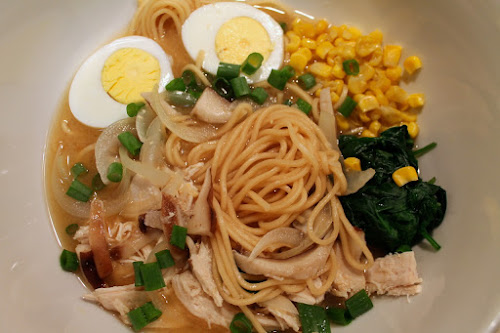 Like any American who attended college in the '90s, I've cooked a lot of ramen. So it feels strange to say that with this recipe, I feel like I made it for the first time.

The ramen of my early years, which I started making in high school, was the instant kind: a package of dried semi-cooked noodles and a seasoning packet that contained MSG and 3/4 of your daily allowance of sodium (if you ate the whole thing, which pretty much everyone does). As a soup, it cooked up in just 3 minutes, although I liked the use it as the base for stir fries, which took a little longer--maybe 5 minutes more.


Today, a more authentic and flavorful version of ramen is one of the hottest dishes on the culinary scene. Notable D.C. outlets serving it include Sakuramen, Toki Underground and the newly opened Daikaya. When it comes to Japanese food, these days sushi is taking a back seat to the warm noodle soup.

There are four traditional styles of ramen: (1) Shoyu, a soy sauce-flavored broth usually served with curly noodles, which is the most common style; (2) Miso, a chicken or fish-based broth flavored with miso paste, fermented soybeans, rice and/or barley; (3) Shio, a lightly flavored broth, often made with seaweed--it is the oldest ramen style; and (4) Tonkotsu, a thicker broth made from pork bones.


My version doesn't adhere faithfully to a particular style, although it is closest to miso, since I used a generous helping of miso for flavoring my broth, but I also added some tamari, and the straight ramen noodles I used are more typical of the Shio or Tonkotsu styles. I was grateful for the recipes by Momofuku for 2 and Steamy Kitchen, which I consulted in making my version. I used hard cooked eggs, since I don't often care for the runny kind, but you could soft boil them if you like.


If you are sensitive to sodium, note that that this dish includes 1 tbsp. of miso (about 400-550 mg of sodium, depending on the brand) and 1/2 tbsp. of tamari (350 mg), for a total of 750-900 mg of sodium, which is about 1/3 of the daily recommended intake (plus a minimal additional amount for seasoning the spinach and chicken). While that may seem like a lot, it's still only about half of what you'd get eating the whole package of instant ramen, and since this contains many other ingredients, it's more filling.

1. Add chicken breasts, fresh ginger, 2 cups of chicken broth and salt to taste to a medium saucepan. Bring to boil over medium-high heat and cook for about 10 minutes until the chicken is cooked through. Remove chicken from broth, allow to cool and shred using two forks. Cover to keep warm. Strain the chicken broth to remove the ginger and set the broth aside.

2. Place the eggs in a large saucepan and cover with cold water until there is an inch of water above the eggs. Place pan on stove and heat over medium-high heat until the water boils. Immediately remove pan from heat, cover and let sit for 10 minutes. Then place eggs in ice water for 5 minutes. Carefully crack eggs all over, roll gently on a hard surface, and then use your hands to remove the shell, starting at the less-pointy end. Rinse the peeled eggs by dipping them in the bowl with the ice water. Slice in half.

3. Bring a large pot of water to boil (do not salt). Cook ramen according to package directions (mine cooked in 4 minutes). Drain noodles and set aside until ready to use (do the next three steps while waiting for the water to boil).

4. Fill a large saucepan halfway with water, add salt and bring to boil over medium-high heat. Add spinach and cook a couple minutes until wilted. Drain spinach and set aside.

6. Heat canola oil in a dutch oven or other large soup pot over medium heat. When hot, add mushrooms and sauté until lightly browned, about 5-7 minutes. Add the broth from cooking the chicken in step 1 and the remaining 6 cups of chicken broth. Increase heat to medium-high to bring to boil, add onion, reduce heat to medium-low to simmer while waiting to finish other tasks. Stir in the tamari and miso paste.

7. To serve, place a fourth of the noodles in the bottom of four large bowls. Divide the chicken, hard-cooked eggs, spinach and corn between the bowls. Ladle the miso broth with mushrooms and onion over the mixture. Top with a handful of chopped scallions.
Posted by Cook In / Dine Out at 12:00 AM