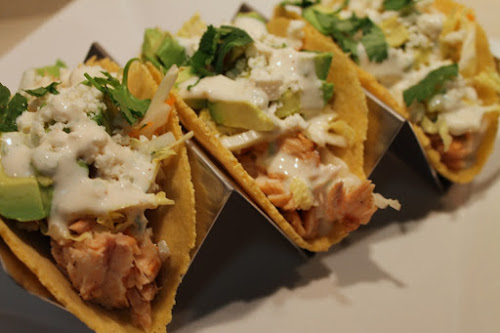 I don't often get fish tacos, but they are a nice alternative to the usual chicken, beef or pork, as well as a fun way to dress up broiled salmon. My favorite memory of fish tacos involves a sandy beach cantina in Cabo San Lucas and a bucket of ice filled with bottles of Tecate. Ahhh... This isn't quite as much fun as that, but it is more fun that the usual broiled salmon over something--vegetables, lentils, beans, etc.

This is a little more involved, although not unreasonable for a weeknight. The slaw takes the most effort, just because of of the peeling and chopping, but it's not that time intensive. You could always buy corn tortillas, but homemade ones are really easy and so much better. The salmon cooks in 10 minutes. If you like tacos, this is great fun.

Unlike a more delicately flavored white fish, salmon can stand up to some zestier accompaniments, like the flavorful slaw and chipotle-lime crema that garnish the fish in these tacos. Peas and Crayons' salmon tacos recipe was an inspiration for my dish, although I broiled my salmon instead of pan-searing it because I find it to be easier and less messy (pan-searing fish tends to create smoke, which sets off my fire detector). 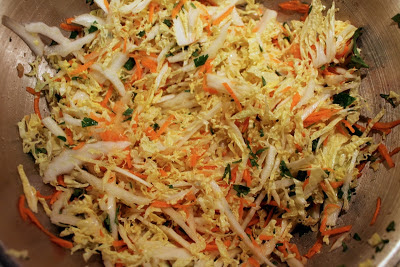 The slaw is particularly delicious. Since it's not practical to make slaw in small quantities, there is plenty leftover to eat as a side salad with the tacos (or save for the next day).

With this dish, I also get to show off my cool metal taco holders (above). If you want some, they are available here.

1. Make the slaw: Combined shredded cabbage, onion, carrot and chopped cilantro. Season with salt. In a small bowl, whisk together vinegar, agave and lime juice. Toss with vegetables. Set aside until ready to use.

2. Make the chipotle-lime crema: Combine the sour cream, lime zest, lime juice and chili powder by stirring with a fork until blended. Transfer to a squeeze bottle, if desired. Refrigerate until ready to use.

3. Make the salmon: Preheat the oven broiler with rack positioned about 5 inches below broiler (the highest position in my oven). Place salmon fillet on an olive oil-sprayed rimmed baking sheet, skin-side down. Combine olive oil, oregano, garlic, lime juice, salt and pepper in a small bowl and spread mixture on the flesh side of the salmon. Broil salmon for 5 minutes. Turn over and broil another 5 minutes or until cooked through. Remove skin and any gray layer. Use a fork to break fish up into chunks no larger than about an inch.

4. Assemble the tacos: Place warm corn tortillas on plate or in taco holder. Add a generous spoonful of salmon, about an equal amount of slaw and smaller amounts of cotija cheese and diced avocado. Drizzle with chipotle-lime crema and top with a sprinkle of fresh cilantro.
Posted by Cook In / Dine Out at 12:00 AM