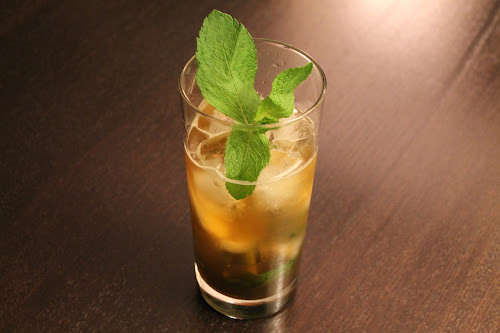 Django Unchained demonstrates Tarantino's typically bold filmmaking style: a visually rich fusion of '60s Italian spaghetti western and '70s blaxploitation genres that gives new spin to old tropes. For the drink, I started with something southern and traditional--a mint julep--and aimed an irreverent shot of fiery peppercorn syrup right through it. Consider it the cocktail equivalent of Django's gunfight in Candie Land.

Combine water, sugar and peppercorns in a saucepan. Bring to boil and cook 2 minutes. Reduce heat to low and simmer 5 minutes. Remove from heat and steep for 40 minutes. Strain out peppercorns.

Like The Django Unchained? Vote for it as your favorite on Facebook. View all nine Oscar Cocktails here.
Posted by Cook In / Dine Out at 12:00 AM