TNT's Dallas has returned for a second season, which is a very big deal when you're married to Dallas Decoder. Monday nights at 9 p.m. is Dallas time.

One of last season's most intriguing storylines was the mystery around the identity of Rebecca Sutter, the new wife of Christopher Ewing, who at first seemed like a sweet young woman, but who turned out to be a con artist. And then, in a final twist, the last episode of the season revealed that Rebecca was really Pamela, daughter of the Ewings' longstanding rival Cliff Barnes.

Although I made a Rebecca cocktail last summer, Pamela is nothing like Rebecca. She needed an update: something that nodded to The Rebecca but stronger, more confident and sophisticated. The Pamela, like The Rebecca is gin-based, but features higher end Plymouth. Both have Cointreau, but instead of grapefruit juice, The Pamela gets its citrus flavor from the fine St. Germain and Galliano liqueurs. 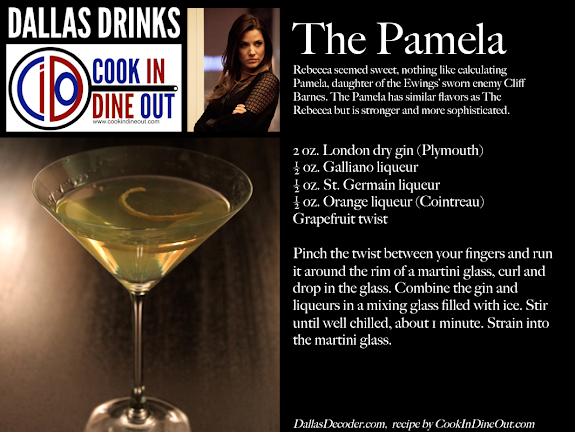