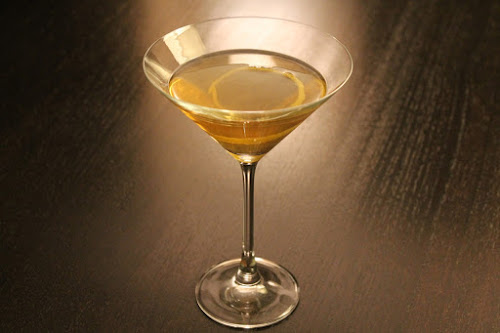 Recovering from wounds inflicted during a botched mission in Istanbul, an aging James Bond tracks an insider espionage trail through London, Shanghai, Macao and back to London, revealing a plot set in motion by a former agent to exact revenge on their boss, M, herself facing professional, if not personal, mortality.

Skyfall received five Academy Award nominations--the most this year for a movie not nominated for Best Picture and the most ever for a James Bond movie. The film's best chance at an award is for its theme song by Adele, but I'm crossing my fingers it may also have a shot at Best Cinematography for the beautiful work by Roger Deakins that made Skyfall the most visually arresting Bond film ever.

For the cocktail, I took the infamous James Bond martini as my starting point, using its Lillet (Lillet Blanc, as Kina Lillet is no longer made), but turning the drink into a scotch cocktail as a nod to the film's climax at the Skyfall manor in Scotland with a little Domaine de Canton for the several sequences in China. And of course, this cocktail is "shaken, not stirred."

Combine scotch, Lillet and ginger liqueur in a shaker with ice. Shake until very cold. Strain into a martini glass and garnish with a lemon twist.
Posted by Cook In / Dine Out at 12:00 AM