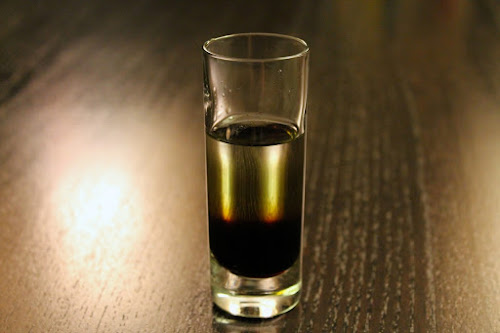 Zero Dark Thirty is the controversial spy movie based on the real life story of a young CIA operative's 8-year search for Osama Bin Laden. The gripping film is Director Kathryn Bigelow's follow-up to her 2010 Best Picture winner, The Hurt Locker, and is nominated for five Oscars, including Original Screenplay, Actress (Jessica Chastain) and Picture.

For the drink, I was inspired by two things: first, the vivid imagery of the film's climatic raid on the Bin Laden compound, shot in first-person perspective through the muted green color of night vision goggles, represented by the dark coffee liqueur and the green tint of Chartreuse. Second, I considered the busy lives of the CIA operatives who put all other considerations aside for this mission. These aren't people who have time for fancy cocktails. A shot seemed more their style.

In a tall shot glass, carefully layer the drink by slowly pour the liquors over the back handle of a spoon touching the inside of the glass just above the previous layer: first the coffee liqueur, then the Chartreuse and finally the vodka.

Like The Zero Dark Thirty? Vote for it as your favorite on Facebook. View all nine Oscar Cocktails here.
Posted by Cook In / Dine Out at 12:00 AM