Oscar Cocktails: The Beasts of the Southern Wild 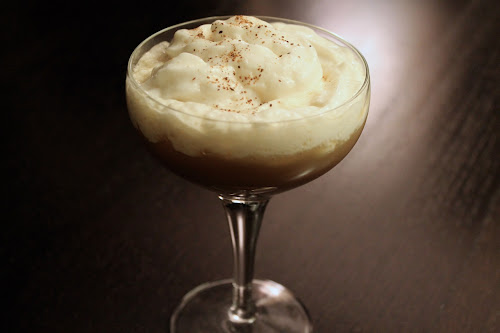 Beasts of the Southern Wild is a surreal fantasy about a 5 year-old girl named Hushpuppy, her father and a community of survivors who live in the "bathtub," a rural water-logged area of Louisiana cut off from society. As a brutal storm approaches, Hushpuppy is taken on a journey of survival as she searches for her mother, fights to save her community and stares down some giant wild cattle. The film is nominated for four Oscars, including Picture, Actress (Quvenzhané Wallis) and Director (Benh Zeitlin).

Being the most unusual film of the group, The Beasts of the Southern Wild deserved the most unusual drink. For this, I wanted a dessert cocktail, and started with rye whiskey for the film's southern setting and some walnut liqueur for depth and sweetness. Since floating a fried corn fritter in the drink to represent Hushpuppy seemed unwise, I instead invoked that idea by make a simple syrup flavored with roasted corn. To recreate the concept of the bathtub, I thought about a bubble bath and topped the drink with milk foam.

Oscar Cocktails: The Beasts of the Southern Wild

Combine whiskey, walnut liqueur, roasted corn syrup and milk in shaker with ice. Shake until cold and strain into a chilled coupe. Top with a generous portion of milk foam and a sprinkle of nutmeg.

1. Preheat oven to 400 F. Spread corn in an even layer on a rimmed baking sheet. Roast for about 20 minutes until the corn looks dried out and browned in places. Set aside to cool and refrigerate until ready to make syrup.

2. In a medium saucepan over medium-high heat, bring to boil water, sugar and roasted corn. Boil for 2 minutes, reduce heat to medium-low and simmer for 10 minutes. Remove pan from heat and steep for about 40 minutes. Strain liquid in a small bowl, pressing on the corn kernels to release liquid (the corn will absorb some of the syrup, so this recipe makes less syrup than typical for this amount of water and sugar). Store in a sealed container in the refrigerator (note: to extend the life of the syrup, add a little vodka to inhibit mold formation).

In a small saucepan over low heat, combine milk, gelatin, sugar and vanilla, and cook, stirring frequently, until the gelatin has dissolved and combined with the milk. Set aside to cool. Pour mixture into a pint-size cream siphon. Charge with two N2O cartridges and refrigerate until well chilled, at least 4 hours.


Like The Beasts of the Southern Wild? Vote for it as your favorite on Facebook. View all nine Oscar Cocktails here.
Posted by Cook In / Dine Out at 12:00 AM