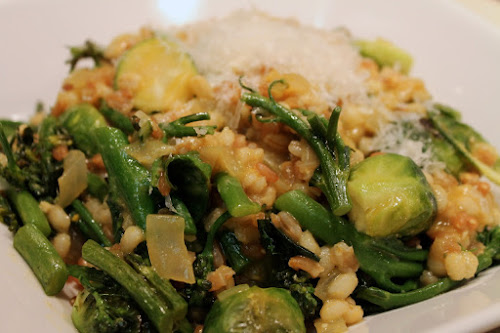 The Washington Post recently ran this beautiful recipe for Five-Grain Risotto with Broccolini and Brussels Sprouts. Although I've had fun experimenting with different vegetables in risotto, until now I'd never tried making it with grains other than rice. The results were fantastic. I loved the combination of flavors. For those who think making risotto is too labor-intensive, this one is much easier: only occasional stirring is needed. 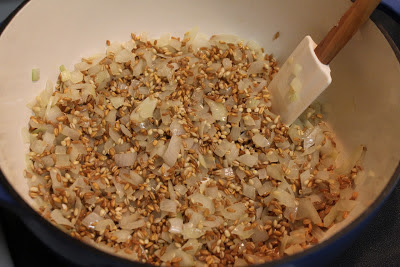 The original recipe called for using five grains: farro, wheat berries, pearled barley, buckwheat groats and bulgur. Not having them on hand, I omitted the buckwheat and bulgur, substituting greater amounts of farro and barley. I bet other grains would also work in this. Be interesting to try it with quinoa or steel-cut oats (if you experiment, I'd love to hear about the results). 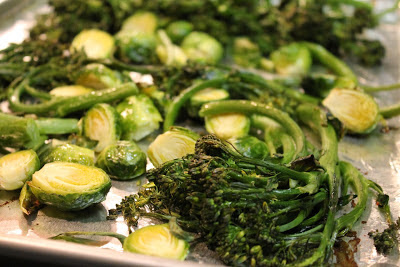 The dish originated as part of the Food section's recent all-vegetarian coverage on March 6. Food section editor Joe Yonan and restaurant critic Tom Sietsema visited several well-known D.C. restaurants and ate only vegetarian dishes, in some cases challenging the chefs to come up with something more inventive than the usual fare. At Mintwood Place, chef Cedric Maupillar constructed a vegetable napolean that's an architectural feat: made with planks of onion tart, structured with beans, eggplant and Brussels sprouts and topped with a mix of greens. While there, The Food writers also sampled the multi-grain risotto, which is a usual vegetarian item on the menu.

Adapted from Five-Grain Risotto with Brussels Sprouts and Broccolini by Joe Yonan for the Washington Post as adapted from a recipe by Cedric Maupillar, chef of Mintwood Place in Washington, D.C.

1. Heat broth in 4-quart saucepan over medium heat (or in a large glass measuring cup in the microwave) until simmering.

3. Heat 1 tbsp. of the oil in a large skillet or Dutch oven over medium heat. Add the onion and garlic and cook until softened, but not browned, about 5-6 minutes. Add the farro, wheat berries and barley, stirring to coat evenly. Stir in the sherry (or mirin) and cook until it has evaporated. Add all of the warm broth (but not the reserved 1/4 cup of broth and miso) and stir to combine. Once the mixture is bubbling, cook, stirring occasionally, until the grains are tender and the mixture is creamy, about 40 to 45 minutes.

4. While the risotto cooks, preheat the oven to 450 F. Toss the broccolini and Brussels sprouts with the remaining tbsp. of oil and spread on a rimmed baking sheet. Roast vegetables until tender and lightly browned, about 10 to 15 minutes, stirring halfway through. Remove from oven and allow to cool a bit then chop the broccolini into large pieces.

5. Stir the reserved broth-miso mixture into the risotto then add the roasted vegetables and parmesan.
Posted by Cook In / Dine Out at 12:00 AM