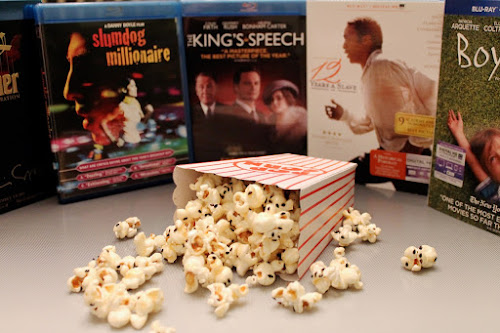 8-2-Eat is my food-focused list series. A perfect Friday distraction. Sunday night is the 88th Academy Awards, also known as the Oscars. Here are 8 ideas for fun food and drinks to serve at your Oscar Party. And the envelope goes to...

Flavored Popcorn. Popcorn and movies are a classic pairing, but rather than top those fluffy popped kernels with just butter and salt, why not try something more interesting like Sriracha-Spiced Honey-Sesame Popcorn or Fajita-Spiced Popcorn? Then there's my favorite: Cracker Jack, the old-school caramel corn with peanuts.

Nachos. This also goes with the movies--at least I see nachos sold at most cinema concessions stands these days. The version you make at home will certainly be better.

Buffalo Chicken Sliders. I invented this recipe for the Super Bowl, but for a lot of people, the Oscars are the "other" Super Bowl (frankly, they're the one I'm more interested in). These tasty bite-size burgers would be perfect to chow on while the first few awards are handed out.

Classy Appetizers. If your Oscar party is a more elegant affair, you'll want food that matches such as Bacon-Wrapped Blue Cheese Dates, Endive with Honey Goat Cheese and Pecans or Crostini with Smoked Blue Cheese, Caramelized Onion and Rosemary.

Pizza. If you're aiming to serve something more substantial, I say pizza is the way to go.

Healthy Snacks. The Oscars usually go late, so while you may serve dinner beforehand or heavy hors d'oeuvres when they start, your guests might appreciate noshing on something lighter as the night wears on such as Crispy Kale Chips or Roasted Chickpeas.

Cake. About halfway through the show, you can really impress your guests by serving them a camera-ready dessert. This flourless Chocolate Truffle Cake would probably win their votes, or perhaps Triple Chocolate Mousse Cake or Coffee Cake with Coffee Frosting, which actually tastes like coffee.

Cocktails. Of course, your guests need something to drink, and nothing is better than signature cocktails inspired by the Oscar nominated films. Whether you're rooting for The Big Short, The Revenant or Spotlight to win Best Picture, I got you covered, and there's even a drink for the Star Wars: The Force Awakens fans who are still upset that film wasn't nominated. Check out all the Oscar Cocktails for this year, 2015, 2014 and 2013.