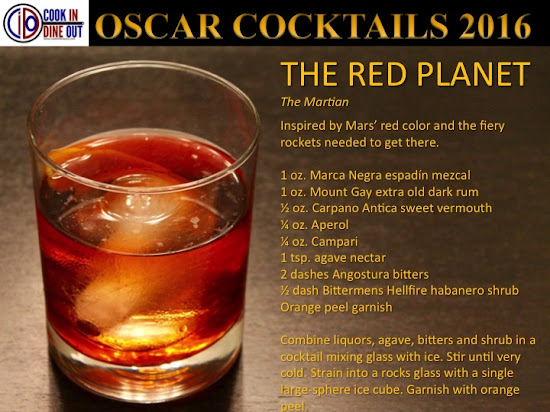 The Martian, adapted from Andy Weir's popular novel, tells the fictional story of NASA astronaut  Mark Watney (Matt Damon), who is presumed dead and marooned on Mars when his crew must abandon their mission during a surprise storm. Watney must use his ingenuity to survive alone on the red planet and find a way to communicate with Earth so he may return home. The film is latest great science fiction epic from director Ridley Scott (Alien, Blade Runner). It is nominated for seven Academy Awards, including Best Picture and Actor (Damon).

The Red Planet is one of several Oscar cocktails with a split base--meaning that rather than having the typical one base spirit, it has two--in this case mezcal and rum. This was a decision made for flavor, as well as color. I wanted the smokiness of mezcal to represent the rocket fuel needed for interplanetary travel, but the sweetness and brown color of rum as well. To make the drink the ruddy reddish-orange of Mars, I used equal parts of Campari (which is red) and Aperol (which is orange). When combined with the brown rum, you get that nice ruddy red-orange color like the surface of Mars.

When I first made this drink, I used all the liquors and served it "up" (i.e. without ice) in a coupe. It looked cool, but it was missing something, and it wasn't sweet enough. The added 1 tsp. of agave nectar was just enough sweetness to balance with the smoky and bitter flavors and serving the drink on the rocks--with a single large round ice cube--added an additional visual cue for how the drink is meant to represent Mars.