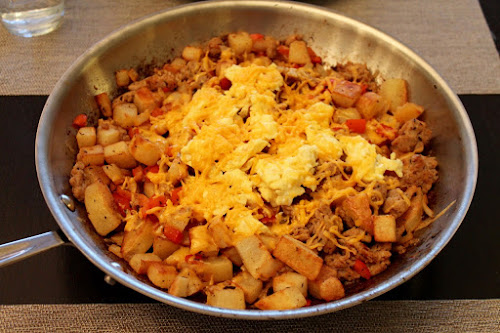 Breakfast for us is usually simple: cereal, orange wedges, coffee. I usually make scrambled eggs once a week and there are occasionally more complicated weekend treats like omelets or pancakes.

Being snowed in as we were recently, I decided it was a good opportunity to make a special breakfast. Hence, this breakfast skillet hash, a classic combination of fried potatoes, sausage, eggs, cheese and vegetables. This is homestyle cooking at its simple best.

As a kid, my family would sometimes eat breakfast at The Village Inn, and their breakfast skillets were our favorite things to order. More recently, Chris and I ate delicious hash plates at 24 Diner in Austin, Texas. Whether you call it a skillet or hash--or skillet-hash--it's good stuff. 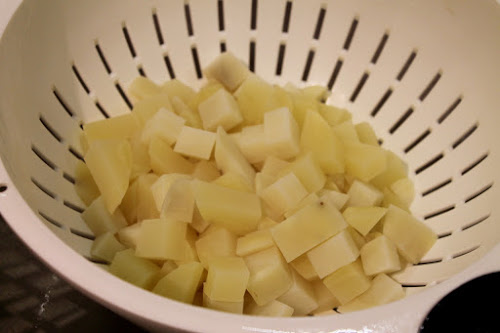 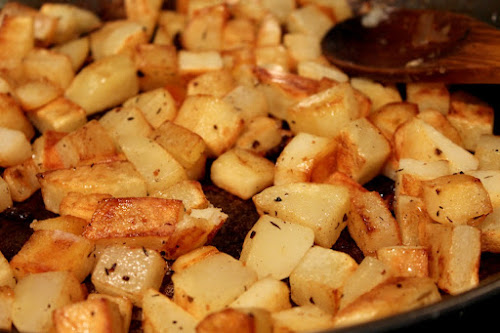 Since the potatoes are, by volume, the largest ingredient in the dish, it's important to get them right. They need to be firm but cooked through, browned and crispy on the edges. I used The Food Lab's recommended method of par-boiling the potatoes with vinegar, letting them drain awhile and then frying them for quite awhile until crispy. They turned out exactly as I wanted them too. The par-boiling helps cook the potatoes through, since the frying will mostly be about crisping up the edges. The bit of vinegar helps the potatoes keep their shape through all this. While frying them, I first stirred the potatoes to coat them in the oil, then smoothed them into an even layer, which I let cook for 5 minutes without being disturbed to help promote browning. 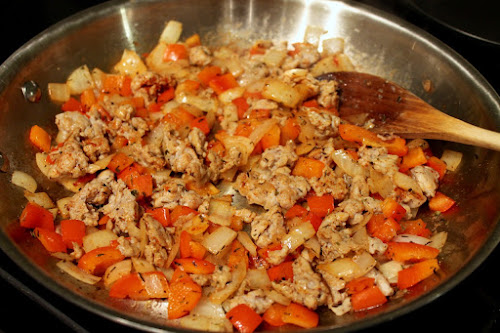 What you put in this dish besides potatoes is really up to you. Some kind of meat--sausage, bacon or ham--is good, but you could make this vegetarian too. I used Whole Foods mild Italian chicken sausage, since it's one of my favorites, half an onion and a red bell pepper. I topped the skillet with two scrambled eggs (I suggest one egg per person) and a good sprinkle of shredded cheddar cheese, which I melted under the oven broiler. 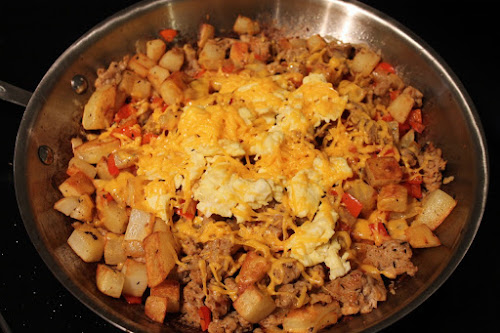 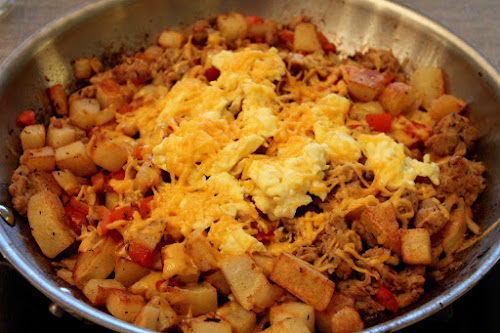 1. Add potatoes, water, vinegar and kosher salt to a large saucepan and bring to a boil. Reduce heat to simmer for 5 minutes. Drain potatoes in a colander and allow them to sit in the colander for at least a couple minutes so as much water drains out as possible.

2. Heat 1 tbsp. vegetable oil in a large (12-inch) frying pan over medium heat (note: if using pork sausage, it will render more fat, so I don't think you need this initial 1 tbsp. of oil). Add the sausage and cook, breaking up with wooden spoon, until cooked through. Transfer the sausage to a large bowl.

3. If needed, add another tbsp. of vegetable oil to the pan, increase heat to medium-high, then add the onion and bell pepper. Season with salt, pepper, cayenne pepper, paprika, thyme and oregano, and cook, stirring occasionally until softened. Return the sausage to the pan and continue cooking the mixture until it gets a little brown around the edges. Remove from the pan and transfer back to the large bowl.

4. Add the remaining 4 tbsp. (i.e. 1/4 cup) vegetable oil to the pan. When hot, add the potatoes and cook until browned and crisp around the edges, about 20 minutes, stirring every 5 minutes.

5. While the potatoes cook, scramble the eggs: heat 1 to 2 tsp. butter in a small frying pan over medium heat. Add the eggs and cook, stirring frequently, until set. Remove from the pan and set aside on a small plate.

6. Preheat oven broiler. Once the potatoes are cooked, turn the heat off under the pan and stir in the cooked sausage, onion and pepper. Add the scrambled eggs on top, then cover the whole thing with shredded cheddar cheese. Place under the oven broiler to melt the cheese, about 45 seconds to 1 minute. Serve from the pan.
Posted by Cook In / Dine Out at 12:00 AM