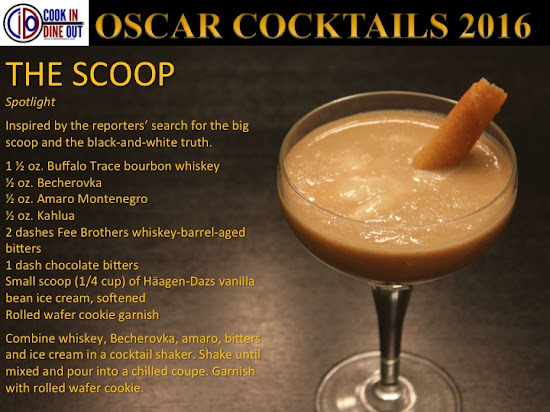 Spotlight is based on the true story of a group of Boston Globe reporters who uncovered the Catholic Church's cover-up of child sexual abuse among Boston-area priests. The film is nominated for six Academy Awards, including Best Picture, Supporting Actor (Mark Ruffalo), Supporting Actress (Rachel McAdams) and Director (Tom McCarthy). It's considered a front-runner in the Best Picture race.

I had a good idea what I wanted to do with the Spotlight cocktail, but it took me three tries to execute it the way I wanted. My thought was to focus on the film's journalistic theme. Newspapers are, as they say, "black and white and read all over," so I wanted a drink with black and white ingredients. I thought about doing something with dark liquors like whiskey, amaro and coffee liqueur mixed with something white like vanilla ice cream. Hence, this was going to be dessert cocktail.

Getting the ingredients right was a challenge. On my first go, the ice cream didn't incorporate well with the other ingredients, ending up as a big lump in the drink. I needed to let it soften a bit first before mixing the cocktail. Because the ice cream is frozen, this cocktail requires no ice, and the ice cream cools the mixture as it melts and combines with the liquors. But if the ice cream is too cold, it won't melt completely. Setting it out for about 5 minutes did the trick.

I also needed to tweak the flavors to get the right. Initially, I made the drink with Carpano Antica sweet vermouth, but I thought its bitterness was getting in the way of the sweet creaminess of the ice cream. So I replaced it with Becherovka, an Eastern European herbal liqueur with prominent notes of cinnamon. This balanced much better with the other ingredients, making a smooth, satisfying drink. I garnished the cocktail with a rolled wafer cookie--a visual nod to the reporter's pencil--and called it "The Scoop," a double entendre for the drink's scoop of ice cream and shorthand for a breaking news story.