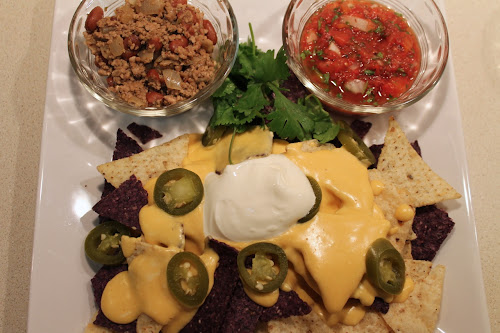 Nachos are one of those dishes that seem so easy that you’d think you could never get them wrong. But, surprisingly, it is rather easy to get nachos wrong, resulting in a soggy, greasy, gloppy mess. With this dish, I set out to instill some order to the chaos. 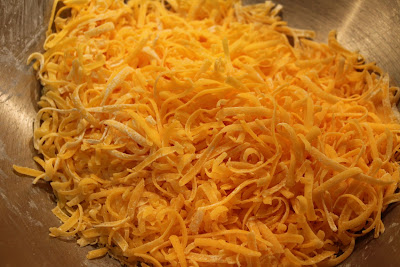 First, let’s talk about the cheese. While it’s tempting to just spread some shredded cheese across the chips and stick them in the oven or microwave, the results are rarely impressive. You usually end up sticking all the chips together and releasing a nice cheese oil slick. This sauce is really quite fantastic. It tastes like the cheese sauce of your concession stand memory, but it’s made with real cheese.


Although I had planned this dish to be a foray into modernist cuisine, I couldn’t find sodium citrate, the compound that supposedly makes cheese sauce really smooth and stay that way. Instead, I found this Serious Eats recipe that uses evaporated milk and corn starch to make a texture as smooth as processed cheese but made with the real thing (I used a combination of cheddar and queso blanco). Although this clumps up a bit after it’s cooled a while, it’s still way smoother than making a cheese sauce with béchamel and certainly an improvement over plain melted cheese. 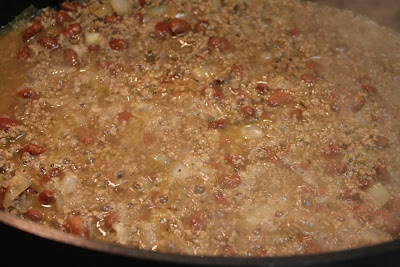 Next, the meat. While meat isn’t essential to nachos, I think it’s a nice add on. For this dish, I made a quick chili with some onion, pinto beans and spices. I wanted a chili that was pretty thick, so I simmered it until the bottom of the pan was almost dry, helping to keep the chili from sogging the chips. As an added precaution, I served the chili in a ramekin on the side, an optional but nice presentation.


Lastly, there’s the salsa. So-called “fresh” tomatoes this time of year taste like &%*(%#, so rather than subject you to that nonsense, I used canned tomatoes, specifically Muir Glen fire-roasted diced tomatoes (which, incidentally, now come in a low-sodium variety). Fresh salsa is so simple: just combine the ingredients and pulse a few times in the food processor. Done. 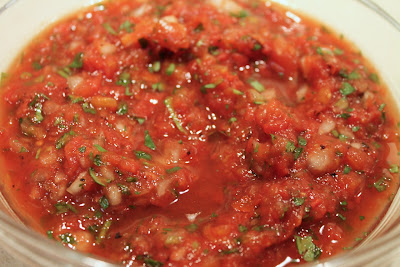 This dish is really quite versatile. I could see lots of potential alterations: add roasted red pepper to the cheese sauce, serve with guacamole, use black or kidney beans, use beef or leave out the meat altogether. Design it the way you want, just be careful not to hit nacho overkill. 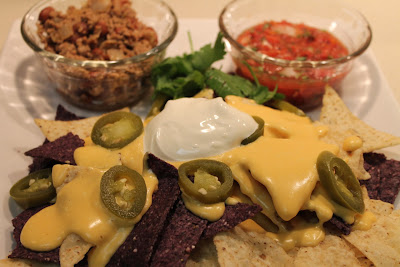 1. Preheat oven to 200 F. Spread chips on a rimmed baking sheet and place in the oven to warm while making the other components.

2. When ready to serve, pile chips on a plate. Top with a generous ladle of cheese sauce, a few pickled jalapeño slices and a dollop of sour cream.

3. Serve nacho chili and salsa on the side in ramekins (alternatively, serve on the chips before topping with cheese sauce).

Combine shredded cheese and cornstarch in a large bowl, tossing to coat cheese. Heat a medium saucepan over medium heat. Add cheese mixture, evaporated milk and hot sauce. Cook, stirring occasionally until the mixture begins to lightly bubble, then reduce heat to medium-low and cook, stirring constantly until cheese has melted and mixture is smooth, about 10 minutes.

1. Heat 1 tbsp. canola oil in a large skillet over medium heat. Add turkey and cook until browned. Remove from pan to cool. Pulse in a food processor a few times to break up.

Combine ingredients in a food processor and pulse about 10 times (1 second pulses) until combined but still chunky.
Posted by Cook In / Dine Out at 12:00 AM